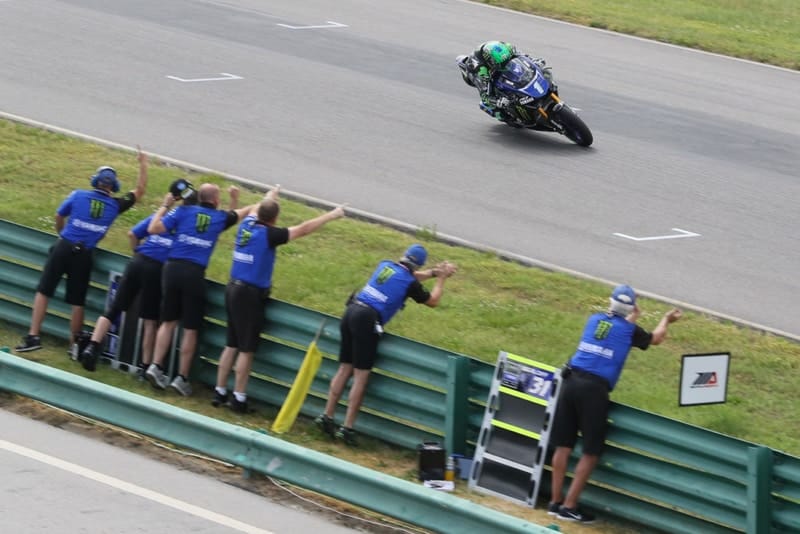 The perfect weekend for Yamaha continued as Cameron Beaubier took victory in race one ahead of Toni Elias and team-mate Garrett Gerloff.

Gerloff started from pole after getting the better of Beaubier in the fifteen minute Superpole shootout. The team-mates led every session throughout the day but, as the lights went out, it was Gerloff who made the better start.

Beaubier was then passed by Mathew Scholtz. Scholtz wasted no time as he then made his way past Gerloff and took the lead by the end of lap one.

Scholtz had started the race four points behind Josh Herrin, and knew he had a golden opportunity to overhaul the American, who was struggling to find the right balance on his Suzuki. The South African was pushing extremely hard, but on lap two he crashed out of the lead at turn 14, handing the advantage back to Gerloff.

Herrin couldn’t capitalize on the Scholtz DNF, as mechanical issues a few laps later led to the Suzuki rider retiring from the race. JD Beach had a great showing on the Attack Performance Eastern Racing Yamaha bike, finsihing in fourth place. This finish sees him jump ahead of both Scholtz and Herrin the standings. Jake Lewis took fifth place ahead of former WorldSBK rider Jake Gagne on the BMW.

Gerloff had Beaubier all over him, and the three-time champion took the lead going into turn one on lap four. For the next few laps, the gap stayed consistently at around one second. But as the riders hit the mid-race point, Beaubier started to inch away from Gerloff who was coming under increasing pressure from championship leader Elias.

Elias spent a few laps behind Gerloff, but just like Beaubier did, he went through at turn one and into second place. Elias was trying his best to keep Beaubier in his sights, but the American was in a league of his own. He ultimately won by a margin of +3.509s.

Gerloff was keeping pace with Elias in the battle for second and looked to be lining up a move with five laps to go. But a mistake saw him run wide and squander the opportunity to make it a one-two for the team. Gerloff finished +9.462s behind race winner Beaubier.

It looked to be a damage limitation weekend for Elias, but the fast-starting Spaniard can never be discounted and will be confident of fighting Beaubier in Sunday’s race two.

Speaking to Paul Carruthers of MotoAmerica after the race, Beaubier said “I felt pretty comfortable on the R1 out there, we were able to get up to pace pretty quick. I feel like I’ve kind of struggled getting that pace here in the past. This one just feels really, really good.”

“I’m sure tomorrow is going to be tougher. Both these guys are going to go back and its going to be a dog-fight tomorrow. Just in the past we’ve always been fast here. I feel like the R1 works pretty good here. I think I have one win to my name at this track in the past five years or something like that.”