Thursday’s practice sessions for the FIA World Endurance Championship‘s 2019 6 Hours of Spa-Francorchamps saw an array of conditions, with the wet weather of free practice two seeing lots of stoppages and red flags. It was SMP Racing who showed a strong hand, looking to be comfortably the best of the rest in the LMP1 Privateers, and even gave Toyota Gazoo Racing something to think about.

There is a strong chance that Toyota will run away with the race tomorrow, but it was a refreshing sight to see the two Japanese-powered cars not dominate the top of the timing board. For the first practice session, the only dry session yesterday, SMP put Toyota through their paces, finishing with both of their cars half a second faster than the Toyotas.

Home hero Stoffel Vandoorne briefly put a smile on the Belgium crowd’s face as he sat at the top of the timing board with a 1:58.236. But Sergey Sirotkin in the sister #17 blasted through that time with a 1:56.264, finding nearly two seconds advantage out on track.

Rain fell in second practice, however, and it was quickly back to business per usual. Fernando Alonso took his #8 Toyota back to the top with a lap time a second faster than Mike Conway could achieve in the other car. Alonso’s lap time came just before the third red flag of the session which also brought heavier rain, meaning no one could improve their lap times.

Even in the wet, SMP were still at Toyota’s ankles. Vitaly Petrov‘s time was only six-tenths off the #7 Toyota, and with bad weather predicted for tomorrow’s race the pressure could really be building in the Toyota camp. Sadly, due to an early aquaplane from Stephane Sarrazin and the worsening weather, the second SMP Racing car was unable to set a competitive lap time in second free practice. 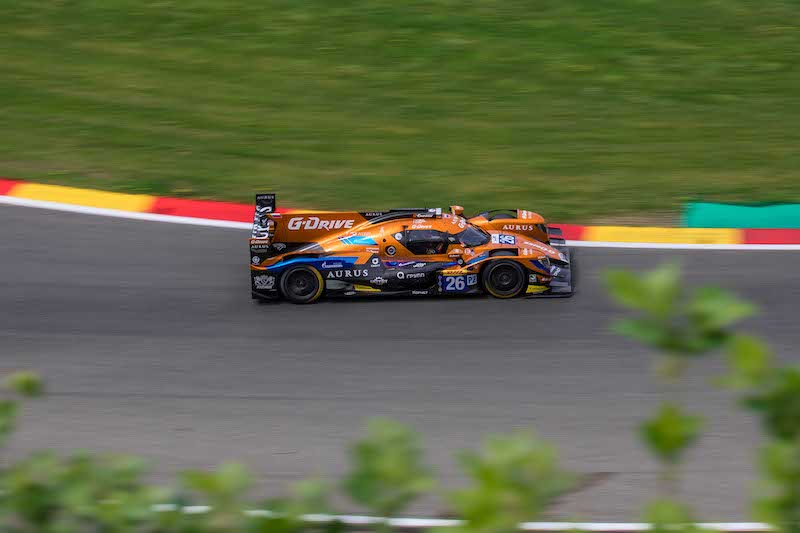 The Bykolles Racing Team, that sat out of the first race of 2019 due to changing their engine provider, had a very difficult return to endurance racing. Still getting used to the new engine and describing the car as ‘completely brand new’, Tom Dillmann, Oliver Webb and Paolo Ruberti struggled to find optimum pace. In first practice, they finished seven seconds off the leader and behind two LMP2 cars, whilst in second practice – although it topped the timing screen early on – finished sixth (the bottom of the LMP1 group as the #17 SMP Racing did not set a time).

Class championship leaders in LMP2 Signatech Alpine led the way in first practice, followed by one-off entrants G-Drive Racing. The #36 crew had over a second lead on their championship rivals Jackie Chan DC Racing and are looking like they’re in a strong position for tomorrow’s race.

The rain brought some carnage in free practice two, and saw the order completely mixed up. Pastor Maldonado led the way in LMP2 as the rain fell, with the #28 TDS Racing behind him in the charge. The weather looks like it could play a massive effect on the field in tomorrow’s race, not only by reducing the pace and removing some team’s advantages over the field, but also by catching some drivers out and forcing their hand into mistakes.

The story in LM GTE Pro saw Aston Martin Racing leading the charge on a dry track, with local racer Maxime Martin setting the benchmark with a 2:15.290 in the #97 he shares with Alex Lynn. In dry conditions, it looks like the battle will be between Aston Martin and Ford Chip Ganassi as the two teams secured the top five in class, split only by the BMW Team MTEK #82 of Antonio Felix da Costa and Augusto Farfus in third.

The class championship leaders, Porsche GT Team #92, sat eighth after the chequered flag flew on the dry morning session, behind the sister car and only faster than the two AF Corses. The wet weather did nothing to help the class leaders climbed higher up the timing screen, but it did boost the sister car to second in class, splitting the two Aston Martins.

The #95 Aston Martin stayed ahead, holding station at the top of the timing board and marking itself as one to watch as the duo of drivers have their eyes on their first victory in WEC this season.

Porsche are looking strong in the LM GTE Am class as well, with a Porsche topping the class in both sessions. In the dry, it was the #86 Gulf Racing Porsche that set the pace, holding off the #54 Spirit of Race Ferrari by just under a tenth of a second. Last year’s Le Mans class winners #77 Dempsey-Proton Racing was fastest in the wet second practice once again holding off a Ferrari in second, but this time it was the #70 MR Racing of Motoaki Ishikawa, Olivier Beretta and Eddie Cheever III.

The class leaders Team Project 1 didn’t make any waves in lap times yesterday, staying out of trouble and having clean sessions. They were seven tenths off in first practice, whilst they dropped 3.8 seconds on the class fastest in the wet second practice.