Lewis Hamilton on Monza defeat: “I cherish this battle with Ferrari, I want it to continue” 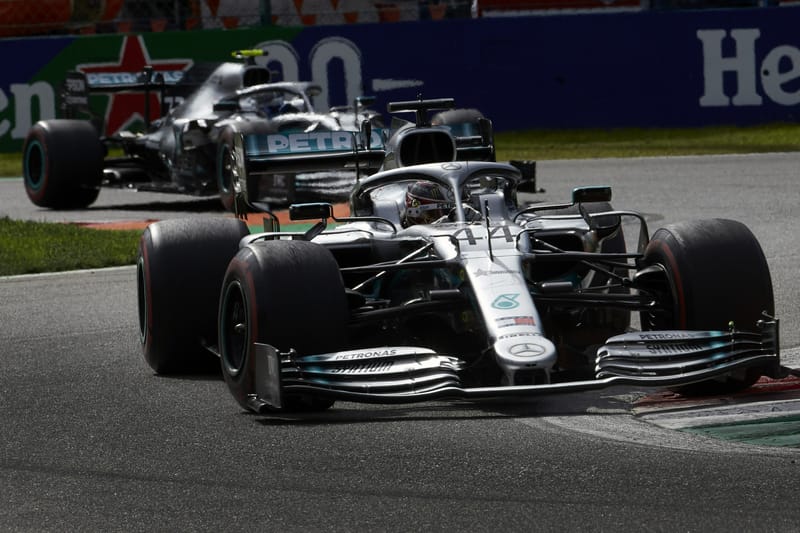 Although disappointed that he was unable to get the better of Charles Leclerc in the 2019 Italian Grand Prix, Lewis Hamilton says he ‘cherishes the battle between Mercedes-AMG Motorsport and Scuderia Ferrari.’

Hamilton narrowly missed out on claiming pole-position in Monza as Leclerc scored his fourth pole of the year and held the lead at the start of the race.

Until a mistake on lap forty-two Hamilton had stalked Leclerc at an average gap of a less than one second across the start line each lap. Leclerc was able to fend off the five-time world champion with superior straight-line speed and a borderline defence for which he received a black-and-white warning flag.

Despite being squeezed off the circuit by Leclerc at one point, Hamilton hasn’t taken an issue with the young Monegasque’s defensive moves in Monza, instead choosing to congratulate Leclerc on his second grand prix victory.

“Congratulations to Charles today, he did a great job, especially considering the pressure Valtteri and I were putting on him,” said Hamilton. “The Ferrari was very quick in a straight line, so it was difficult to stay close to them.”

Hamilton’s attack came to an end on lap forty-two when his medium-compound tyres cried enough in their pursuit of the hard-compound shod Ferrari. Hamilton locked-up into turn one, taking to the escape road and losing second to team-mate Valtteri Bottas.

Hamilton made a second pit-stop shortly after, enabling him to take the fastest lap point and third place behind race-winner Leclerc and second place Bottas.

“I think it just wasn’t our day today, it’s always disappointing to follow another car so closely but not be able to take the lead,” said Hamilton. “But in the end, we’re leaving Italy with more points in the Constructors’ Championship and ultimately that is what matters.”

Ferrari were expected to perform well at Monza, as it had the week previous in Belgium. The next race, the Singapore Grand Prix is expected to suit Mercedes’ but Hamilton says he isn’t taking anything for granted, while saying how much he’s enjoying the current battle at the front of the field.

“I’m not looking to the next race thinking it will be easy for us; instead we’re going to go to the factory next week and go through the same process, looking for ways to improve our car, improve our processes over a race weekend, and I hope that I can do a better job in Singapore.

“I personally cherish this battle between Ferrari, Red Bull and us, so I want it to continue.”

Although Hamilton was beaten by Leclerc for the second race in a row and saw nearest title-rival Bottas finish ahead also, he retains a sixty-three point lead in the drivers’ championship with seven races of 2019 remaining.

Mercedes have extended their lead in the constructors’ title race to 154-points.

Formula 1 Writer for TheCheckeredFlag. Tried racing once, crashed lots; writing about it is much safer. Follow me on Twitter @CVennF1

Valtteri Bottas: “We managed to maximise everything available to us”

Lewis Hamilton ‘So, so Happy’ after Dominating Styrian Grand Prix

Mercedes: Hamilton Produced ‘Stunning Lap’ To Take Pole in the Wet at...