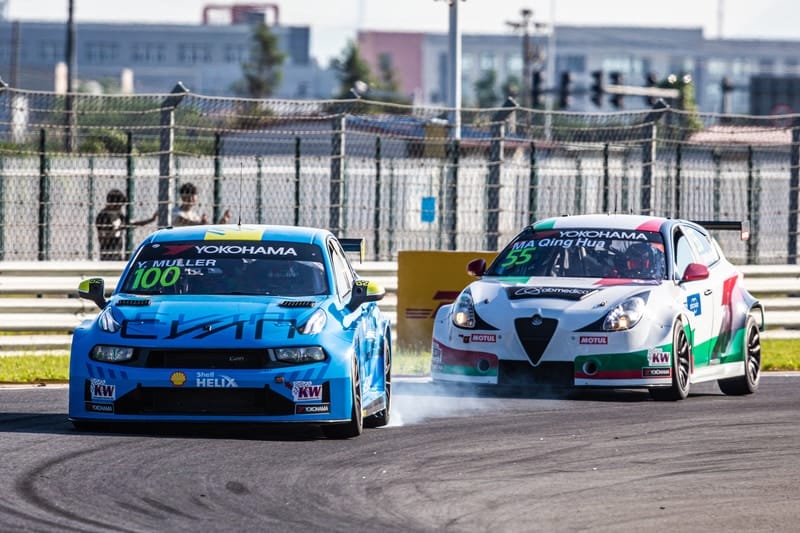 The race started with a bang, quite literally, before the cars had even left the grid for their warm-up lap. Championship points leader, Esteban Guerrieri, sabotaged his own chances of a good result when he accidentally triggered his car’s on-board fire extinguisher. Naturally, the Munnich Motorsport Honda had to be wheeled into the pit-lane for cleaning purposes, but from there, his hopes of scoring valuable points had been utterly extinguished too.

On the track meanwhile, Muller got a clean getaway, but it was just behind where the action occurred. Local Chinese hero, Ma Qing Hua, didn’t have such a good start and promptly came under threat from the exciting youngster, Mikel Azcona. Azcona’s attempt to hang on around the outside at turns one & two was a little ambitious however, and as such, the podium positions remained as they were. Perhaps influenced by the Spaniard’s exuberant start, Ma himself then launched an attack on Muller for the lead at turn six, but again, he couldn’t quite pull the move off as Muller forcefully closed the door.

A little further back in the midfield, Aurelien Panis continued to quietly make a name for himself, this time getting the better of Augusto Farfus for sixth place. Farfus’ Hyundai stable-mate, Gabriele Tarquini, was having an even worse time though. The reigning World Cup winner had started the race a long way down the order, and was already forced into the pit-lane with damage after just a handful of laps.

While Muller set the pace out in front, his Cyan Racing Lynk & Co team-mates weren’t having quite such an easy time. Andy Priaulx was coming under threat from the Audi of Frederic Vervisch, and with the two other Cyan cars of Thed Bjork and Yann Ehrlacher not far behind, the team decided to deploy Priaulx as a rolling road block, with the hope of allowing Bjork and Ehrlacher to catch up and pounce on the unwitting Audi.

However, things didn’t quite play out as planned. Vervisch soon found his way past the deliberately slow-paced car of Priaulx, at which point the team ordered him to simply make way for his onrushing team-mates. As a former triple world champion in this sport, tactical orders like that must surely be hard to take. Especially when you’re only battling over eleventh.

Further towards the back of the field, a good little battle had broken out for seventeenth place. Benjamin Leuchter‘s attempted overtake on team-mate Mehdi Bennani resulted in the German running out wide in the latter stages of the circuit. At which point, Kevin Ceccon in the Alfa Romeo made an opportunistic move to get by the first of the Volkswagens. A few seconds later, he was past the second one too. Catching Bennani unaware, Ceccon made a beautiful dive to the inside line at turn one in order to snatch the position away. Then, seemingly rattled by this, Bennani dropped too deep into the hairpin which finally opened the door for Leuchter to complete the move that he had started half a lap ago.

With the clock ticking, the leaders were still tightly packed together due to the twisty nature of the Ningbo circuit, however, overtaking was proving to be difficult for the very same reason.

Ma Qing Hua and Norbert Michelisz had speculative looks at the cars ahead of them, but ultimately the status quo remained until the chequered flag was waved.

So, it was Yvan Muller who took his first race victory of the season, and what better place to do it than at the home circuit of his employers, Lynk & Co.

There was more good news for Chinese fans, as Ma Qing Hua held onto a fantastic second place finish, and a step on the podium too as a result. Mikel Azcona would round out the top three, and in doing so, also catapulted himself into the top three in the championship points standings.

Elsewhere, Norbert Michelisz’s fourth place could prove to be vital come the end of the season. With championship leader Esteban Guerrieri failing to score, ‘Norbi’ has slashed his leading margin to just nine points with eleven races to go.