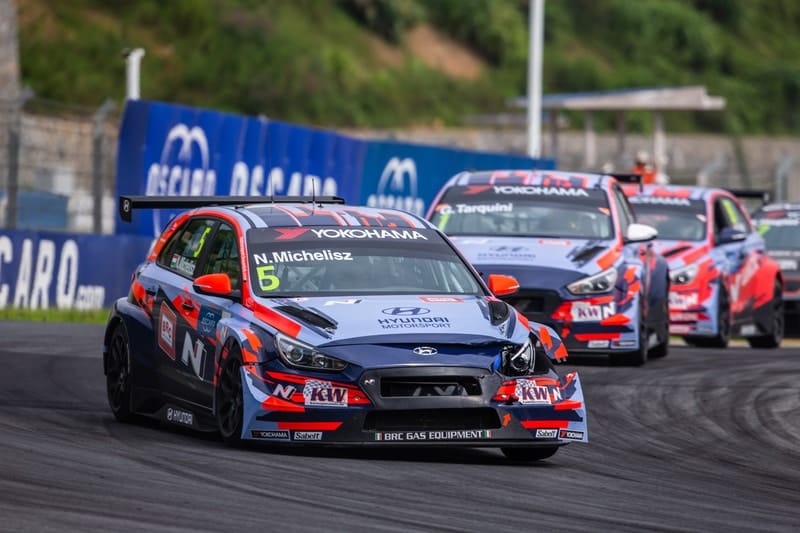 Norbert Michelisz was the eventual victor in the second World Touring Car Cup race at Ningbo last weekend, as many of his rivals fell by the wayside.

Andy Priaulx started the race from pole position, thanks to this race’s starting order being based off of the top ten in qualifying, reversed. The first few corners were taken relatively tamely, however things turned sour at turn six.

Eager to make progress, Mikel Azcona misjudged his braking point and hit the rear of Yann Ehrlacher‘s Lynk & Co, pitching it sideways across the circuit. The wayward Ehrlacher car collected Aurelien Panis, but miraculously both drivers rejoined the circuit, albeit way further down the order.

That was to be a sign of things to come, as just a few seconds later, Tiago Monteiro and Benjamin Leuchter found themselves tangled up in the gravel trap. Then at the hairpin, Augusto Farfus and Nicky Catsburg robustly made their way past Thed Bjork. Farfus’ car was left wounded however, and as he span at the exit of turn twelve, the Brazilian also managed to wipe out championship points leader, Esteban Guerrieri.

Just a few corners later, Ma Qing Hua was added to the first lap casualty list. Unseen by the cameras, the local hero’s Alfa Romeo was hit hard enough to leave it stranded on the circuit minus one of it’s rear wheels.

Naturally, the safety car was called out in order for the marshals to tidy up all the stricken cars that had been littered around the circuit.

Following that caution period, Daniel Haglof was the first driver to attempt an overtake. The move came at turn six on lap seven, when the Swede made a clean dive to the inside of Thed Bjork for fifth place. With Yvan Muller not too far behind, Bjork conceded to his French team-mate too.

Mikel Azcona and Nestor Girolami dropped out with mechanical failures, but up front, everything seemed to be going well for Andy Priaulx. The three-time world touring car champion had endured a difficult season thus far, so it was a refreshing sight to see the Guernseyman happily leading a race.

Sadly though, luck was simply not on his side. Due to the amount of debris on circuit from earlier accidents, Priaulx picked up a slow puncture and soon came under threat from Norbert Michelisz.

On lap twelve, the front-left tyre finally gave way upon entry to turn six. This resulted in Priaulx having to brake much harder and much earlier than usual, giving Michelisz nowhere to go but into the back of the Lynk & Co in front of him. The inevitable contact sent Priaulx spinning to the inside line, while the trio of Hyundai that were trailing him scattered towards the outside run-off areas.

Priaulx’s race was over, but through it all, Gabriele Tarquini emerged as the new leader ahead of the slightly wounded car of Norbert Michelisz. Nicky Catsburg was now running in third, making it a Hyundai lock-out of the podium places.

Naturally, team orders came into play, and with Michelisz thoroughly in the fight for the championship, Tarquini moved over to give his Hungarian team-mate the lead of the race (and the extra championship points that come with it).

However, not even Hyundai could avoid misfortune in this race. Daniel Haglof attempted to overtake Catsburg for third, but the Dutchman defended harshly. This hampered both drivers, gifting third place to Lynk & Co’s Yvan Muller who was now creeping back into the championship picture.

Tarquini ensured that Muller didn’t make any further progress, and so Norbert Michelisz brought his car home to take the victory. And what an important victory it was. As Guerrieri failed to finish, and thus failed to score, Michelisz had now overhauled the Argentine’s lead in the standings by sixteen points.