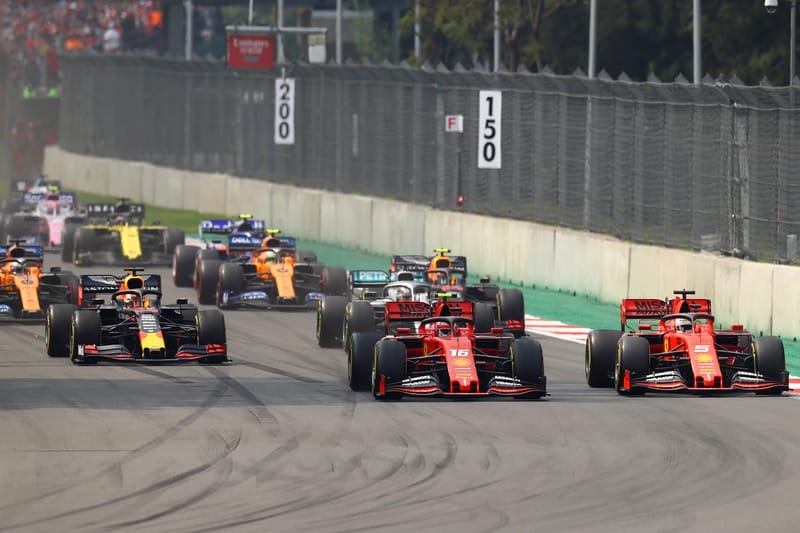 For the rookies, Mexico was a nightmare weekend with only Alexander Albon bagging points with his seventh top-six finish of his debut campaign, whilst Lando Norris and Antonio Giovinazzi’s charge for points ended with pitstop errors.

It wasn’t a perfect weekend for Alexander Albon, but after a shunt in Free Practice 2, the Thai-British driver came good to drive a clean race and to finishing ahead of his team leader.

After an unblemished first practice session, Albon made a mistake coming into turn seven at the start of the second practice session spinning his Red Bull into the tyre barrier and ending his Friday running early.

Luckily for Albon, the car was repaired in time for Free Practice 3, and for qualifying was able to beat Bottas for fifth on the grid although his lap was compromised due to the latter’s crash at turn 17.

At the start of the race, Albon got away brilliantly and helped himself to three positions after his teammate Max Verstappen and Lewis Hamilton tripped themselves up into turn one meaning Albon was the chief challenger to both Ferrari driver’s before the virtual safety car came out to clean up the debris left from the start.

With the virtual safety car ending Albon stuck with the Ferrari’s for the opening laps until the Thai was the first of the front runners to pit for fresh rubber on lap 15 which put him behind Carlos Sainz Jr.

From then on Albon fell back in the pecking order as he was held by Sainz on his outlap, with Albon falling behind both Mercedes driver’s as they pulled away in their own group.

Albon took the chequered flag in fifth place and the top Red Bull driver as he bids for the second Red Bull seat alongside Verstappen.

Qualified: Eighth | Race: Did Not Finish- Retired on lap 48

In what’s been a relatively mistake-free season for McLaren F1 Team and Norris, Mexico was a bit of disaster for the Brit, as McLaren let him down by failing to attach his front left wheel properly at his pitstop.

Norris had a solid if unspectacular weekend up until his pitstop fiasco, with the Brit getting his fourth Q3 appearance in a row as he was just 0.308 seconds away from out-qualifying teammate Sainz.

At the start, Norris avoided all of the chaos, and quickly got passed Bottas into turn five before the virtual safety car came out ending the momentum that he had from the start.

Norris lost ground after the virtual safety car ended, and his race was effectively ended on lap 13 after the Brit was sent on his way with his left front tyre not properly attached, which caused Norris to be hurridly pushed back to the pits to attach the wheel and to be sent back on track a lap down.

McLaren eventually ended the Brit’s race on lap 48 whilst under investigation for an unsafe release, leaving the Brit with his second pointless weekend in a row.

Antonio Giovinazzi had a disastrous Mexican Grand Prix weekend where any hope of points was lost in a pitlane error which was no fault of his own.

In the run-up to race day, Giovinazzi had struggled with the Alfa Romeo’s pace during the opening two days of practice and qualifying, with the Italian just scraping into Q2 by just under two tenths ahead of Lance Stroll.

In the race itself, Giovinazzi was on the tip of the points in twelfth when the Italian’s race was wrecked after his Alfa Romeo crew dropped the jacks at his pitstop too early and lost a lot of time as they scrambled to recover.

The Italian rallied to finish a lowly fourteenth and a lap down, with time running out to further enhance his credentials for a 2020 seat at Alfa Romeo.

Another day, another pointless weekend for Russell, who can thank his lucky stars that he won’t have to drive the FW42 after the final three race weekends.

Russell once extended his perfect record of out-qualifying his teammate Robert Kubica to 18-0 by over a second and a half as the Brit was once again eliminated from Q1.

Raceday wasn’t much better as Russell fell quickly behind the main pack, with the Brit’s only competitors being teammate Kubica and the two struggling Haas cars.

Amazingly Russell got by Romain Grosjean who had a moment of brain fade when being lapped by the leaders for the second time.

Russell brought the Williams home in sixteenth place as the Brit inherited two positions due to the retirements of fellow rookie Norris and Kimi Räikkönen who had an overheating problem late on.

Russell now only has three races left to try and shake off the burden of being the only driver on the 2019 grid not to have scored a point this season.

By James Thomas
2 Mins read
Approaching his second season in Formula 1, Nicholas Latifi says he feels more confident racing with a year of experience under his belt.