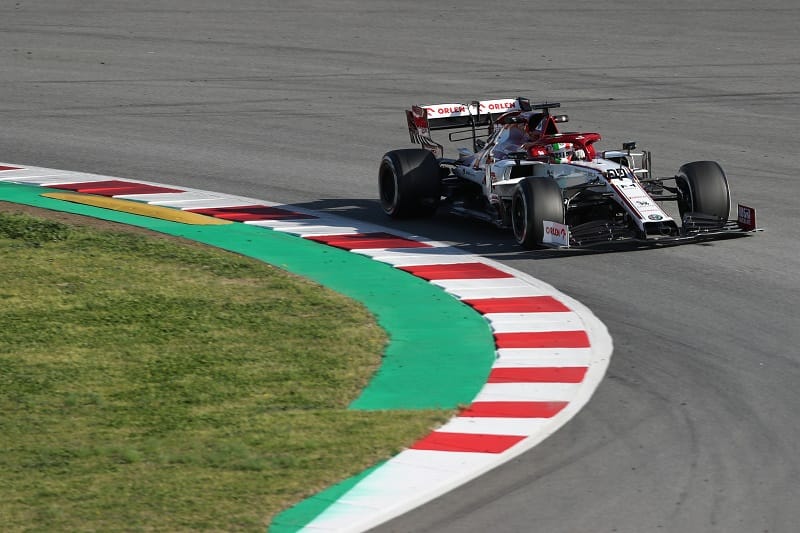 Antonio Giovinazzi’s final day of pre-season testing was a disjointed one, with the Italian spinning off the track and into the barriers midway through the morning session on Thursday.

The Alfa Romeo Racing ORLEN driver was able to return to the pits to enable the car to be repaired, but the session was red flagged to clear the Circuit de Barcelona-Catalunya of debris that the Italian had strewn across the track.

Despite the time lost in the pits, Giovinazzi was still able to complete a healthy ninety-two laps on Thursday, and he feels satisfied with the work that has been done across the two weeks of testing at the Spanish track ahead of the first race of the season next month.

“It was a challenging day from the start,” said Giovinazzi.  “I did a mistake in one of my first runs, when the track was damp, and that cost us some time in the morning.

“When we went out again in the afternoon, the yellow flags ruined our qualifying simulation and we couldn’t really do a lap. At least we were able to follow our long runs programme: the wind was very strong and we struggled a bit, but we were able to get it done.

“It was the last time in the car before Melbourne for me: I am satisfied with these two weeks, we need to focus on our job and try to be strong from the start in Australia.”

‘It was Quite Difficult to get some Consistent Running’ – Xevi Pujolar

Xevi Pujolar, the Head of Track Engineering at Alfa Romeo, admitted Giovinazzi’s final day in the car before the Australian Grand Prix weekend was a big ‘stop-start’ with many interruptions costing the Italian valuable lap time.

Pujolar felt the race simulation that Giovinazzi did on Thursday afternoon went well, but there are certainly many improvements that can be made to the C39-Ferrari ahead of the next time the Italian is in the car next month.

“After nearly two weeks of issue-free running, we had a bit of a stop-start day today,” said Pujolar.  “We lost a bit of time in the morning when we had an off and had to repair the car, and our programme was halted by a few red flags.

“It was quite difficult to get some consistent running, but it was a similar situation for everyone. Our race simulation went well: we had to send the car out without much setup work, so we know we can improve our pace a decent bit.

“We will now focus on our final day of testing before Melbourne: Kimi [Räikkönen] will be in the car tomorrow and follow a similar programme to what we had planned for today.”

Alfa Romeo’s Frédéric Vasseur: “We’ve been in this fight in the last few races”

By Paul Hensby
1 Mins read
Alfa Romeo are due a good result after being points contenders for the past few races, according to Team Principal Frédéric Vasseur after coming close at the Circuit of the Americas.
Formula 1

Kimi Räikkönen: “It is a shame not to bring home any point today”

By Paul Hensby
2 Mins read
Kimi Räikkönen was on course for the top ten in Austin only to spin through the turn six gravel trap late in the day as he battled to hold off Sebastian Vettel for tenth position.
Formula 1