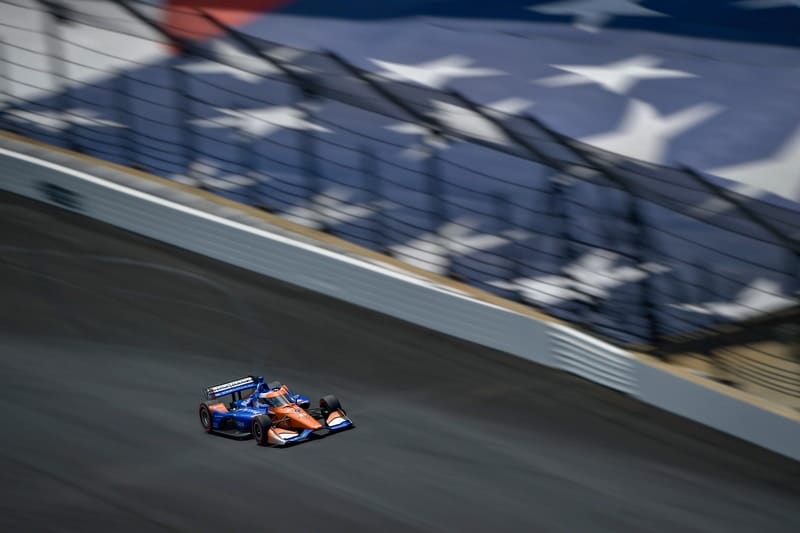 Chip Ganassi Racing‘s Scott Dixon has taken his second win out of two in the 2020 NTT IndyCar Series at the GMR Grand Prix at the Indianapolis Motor Speedway. The New Zealander benefited massively from a mid-race caution period to take the lead soon after. From there, he would be utterly untouchable, taking the victory by an incredible margin of over twenty seconds.

After a brilliant display in qualifying on Friday afternoon, many were fearing that Saturday’s race would go the way of Team Penske‘s Will Power. The Australian took his fourth Indy GP pole position and was looking to get his fourth win from the pole. Everything was looking good for the first half of the race, with Power getting a great jump on the field as the green flag flew to hold his lead into turn one.

For the remainder of the first stint of the race, Power would continue to lead. Will wouldn’t exactly pull away, with Britain’s Jack Harvey hanging onto the coat-tails of the leader to remain within a second for virtually the entire opening phase of the race.

The strategy for the field had originally looked to be a two-stop race based on past events. However, much higher track temperatures would really shake things up. Instead, many drivers would abandon their hopes of a two-stop strategy and would switch to a three-stop strategy.

Once the entire field had made their first pit-stops, Power would re-assume the lead of the race. His Penske team-mate, Josef Newgarden, would move up into second place after undercutting Jack Harvey in the pits. It looked as though Power and Penske were on-track to have a great chance at the victory. However, on lap thirty-five, everything changed.

After qualifying in a superb fourth-place for only his second NTT IndyCar Series race, Arrow McLaren SP‘s Oliver Askew had dropped further back into the top ten at the start of the race. He was looking to try and make up positions as the race wore on, but he would lose the rear-end of his #7 Chevrolet and would slam his car into the outside wall on the exit of the final corner. This would bring out a caution.

The caution was badly timed, as the two-stoppers had only recently been into the pits and the three-stoppers were right in the middle of their pit phase. In particular, this would harm the previous leading trio who had yet to make their second stops. This meant that Power, Newgarden and Harvey would pit under the caution period and would thus restart the race outside of the top ten.

The race would restart on lap forty-one, with the two-stopping cars of Rahal, Pigot and Daly leading the field back to the green flag. Scott Dixon would restart in fourth place having made two of his stops and still requiring one more to make it to the finish.

The caution had been timed to perfection for Dixon, who had been due to be running in sixth had the race stayed green. Now, with a better strategy than those ahead of him, he was determined to get the victory. His pace advantage was such that he would easily move past the new leaders, with Rahal, Pigot and Daly driving much slower than him to conserve tyres and fuel before their final stops.

Dixon would take the lead on lap forty-seven and would duly sprint away. On lap fifty, his lead was up to over five seconds. He would make his final pit-stop at the end of lap fifty-five and would emerge in ninth-place before cycling back up to the lead once the rest of the field had completed their pit strategies.

With ten laps to go, Dixon was now pretty much unbeatable. The New Zealander held an eighteen second lead over second place. There was a brief threat of rain within the final five laps of the race, but thankfully for Dixon, the track remained dry. He would cross the line at the end of lap eighty to take the victory, with his lead extending even further to over twenty-seconds at the finish.

The victory would be a first for Dixon on the Grand Prix circuit at the Indianapolis Motor Speedway. It would also make Dixon only the third driver to have won an IndyCar race on the Indianapolis road course, with all of the previous six races being won by either Simon Pagenaud or Will Power.

Dixon has had a near-perfect start to 2020. The New Zealander kicked off the year with a fourth win at the 24 hours of Daytona in the IMSA WeatherTech SportsCar Championship. After months of delay due to the COVID-19 pandemic, Dixon would kick-off his 2020 IndyCar campaign with a win at the season-opening Genesys 300 at Texas Motor Speedway last month. Now, he has gone back-to-back with a win in the second race at the Indy GP and, as a result, leads the championship with a decent advantage heading into the Road America doubleheader next weekend.

Graham Rahal perfectly executed his two-stop strategy to take second place; his first podium finish in just over a year. The Rahal Letterman Lanigan Racing driver may have been in with a more realistic shot at victory had it not been for the mid-race caution, but he will nevertheless end the day happy after a strong result.

Prior to the mid-race caution, it was looking as though it would be a race to forget for last year’s Indy GP race winner, Simon Pagenaud. The Frenchman had qualified down in twentieth place after a poor qualifying session yesterday and had been unable to make up much ground after being mired in traffic.

However, he would benefit massively from the mid-race caution and managed to fight his way into the podium spots as the race drew to a close. He finished right on the gearbox of Rahal for second place, but the Penske driver ran out of push-to-pass which left him at a disadvantage to Rahal. Nevertheless, finishing third after starting twentieth was a great result for Simon as his strong start to 2020 continues.

Andretti Harding Steinbrenner Autosport‘s Colton Herta started third and finished in a decent fourth-place. The sophomore driver did not look to quite have the pace to be in the fight for the victory, but he will likely be pleased with his solid haul of points.

The top five would be rounded out by the highest-placed rookie of the race. After starting well down in eighteenth, Ed Carpenter Racing‘s Rinus VeeKay bounced back from a nightmare season-opener at Texas to take fifth-place at Indianapolis. The Dutch teenager defied his lack of experience with a fantastic drive and would hold on to his position from a hard-charging Marcus Ericsson as the race concluded. Ericsson would take sixth-place after a similarly strong run in the #8 Ganassi Honda.

After having been running in the podium spots for the first half of the race, reigning series champion Newgarden would have to settle for seventh place. He was unable to pass drivers as quick as he would’ve liked after his pit-stop during the caution. Arrow McLaren SP’s Patricio O’Ward would finish just behind in eighth place, with Santino Ferrucci and Takuma Sato completing the top ten.

After starting last year’s Indy GP from pole position, Felix Rosenqvist would have been hoping for much better than a fifteenth place finish this time around. However, he was caught out by the ill-timed mid-race caution and would drop almost to the back of the field as a result.

Similarly, Meyer Shank Racing‘s Jack Harvey would come away with only a seventeenth-place finish. Harvey ran in a comfortable second-place for the first half of the race and was keeping up with race-leader Power. The British driver could have easily had a chance at taking another Indy GP podium finish, or maybe even victory, had the caution not come out. Nevertheless, the strong pace this weekend will give Jack and his team a lot of confidence heading into Road America.

Will Power’s 2019 season was sadly mired by really bad luck. Today was very much a similar story. The Australian was doing everything right as he led the first half of the race from pole position, but the mid-race caution would put him down in fourteenth place for the race restart. To add insult to injury, Power would stall his #12 Penske Chevrolet on his final pit-stop and would drop even further back. He would finish in twentieth place and as the final driver on the lead lap as a result and will be absolutely determined to put an end to his bad luck next time out.

Dalton Kellett kept out of trouble on his NTT IndyCar Series debut to finish in twenty-first place, one lap down. He was just ahead of Marco Andretti, who finished in twenty-second place after accident damage left him limping for the closing stages of the race. Dreyer & Reinbold Racing‘s Sage Karam would also finish the race one lap down, with the American taking the team to a clean twenty-third place in their first road course race since 2013.

It was a case of what might have been for Spencer Pigot. Driving in one of his only two planned races for Citrone / Buhl Autosport, Pigot had been well in contention for a podium finish until his #45 Honda started to develop engine issues. He would sadly plummet from the podium and would ultimately retire with six laps remaining.

Two other drivers would also be classified as retirements at the end of the race. Alexander Rossi‘s dismal start to the 2020 season continued. His car developed a fuel pressure problem at the mid-race restart which would force him to crawl back around to the pits. The team were unable to fix the problem and would have to retire, joining the aforementioned Oliver Askew who was eliminated from the race following his accident.

The 2020 NTT IndyCar Series will continue next weekend with two races at Road America. The REV Group Grand Prix weekend will begin with the first race on Saturday, July 11, followed by race two on Sunday, July 12.