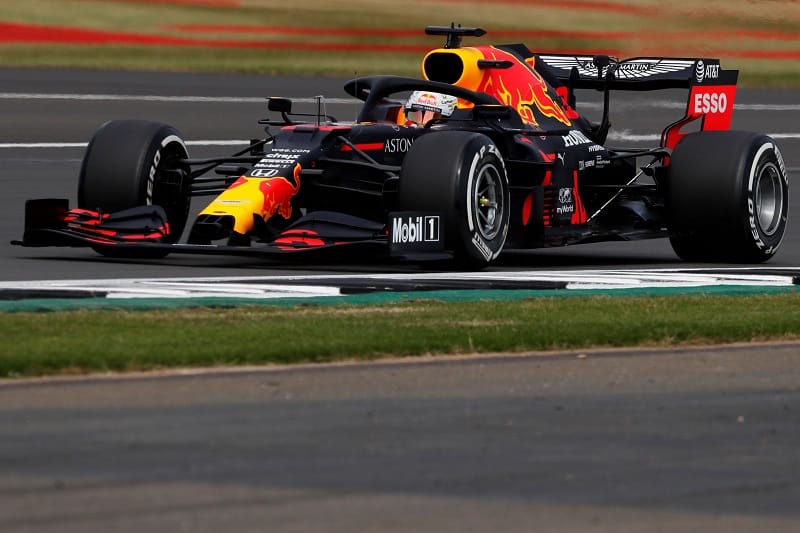 Max Verstappen will be the only driver inside the top ten to start on the hard Pirelli tyre in Sunday’s 70th Anniversary Grand Prix at Silverstone, although it was ultimately tight to get through into the top ten shootout on that compound.

The Aston Martin Red Bull Racing driver finished ninth fastest in Q2 to advance into Q3, with the nine other drivers in the session all starting on the medium tyre.  The soft tyre was never likely to be a popular choice with how few laps they are able to run on it before its performance dropped away.

Pirelli brought tyres one step softer to this weekend’s race than they did seven days ago for the British Grand Prix, so it was always in Verstappen’s mind to start the race on the hard compound, which was the medium last week.

“Starting P4 is of course not perfect but the cars in front did a good job and Q3 was pretty tricky as the wind switched around and unbalanced us a bit,” said Verstappen.

“I felt strongly about using the hard tyre for the race start as we are already on softer compounds this weekend and the medium was last week’s soft, which wasn’t great in the race and with warmer temperatures this weekend I like this option.

“It was just a matter of making it through to Q3 on the hard tyre which we just about did.”

Despite starting on the hardest tyres, Verstappen still remains cautious as to where Red Bull will be on race day, particularly compared to the Mercedes AMG Petronas Formula One Team, although he does expect to be somewhat closer to them than they were in Qualifying mode.

The Dutchman was also quick to praise the efforts of Formula 1 returnee Nico Hülkenberg, who stole the show in Qualifying to put his BWT Racing Point Formula One Team RP20 third on the grid.

“I don’t know what starting on the hard tyre tomorrow will give us and it depends on the first lap and Safety Cars but hopefully it will be positive and it is at least different to everyone else in the top ten,” said the Dutchman.

“It is still a long race tomorrow and our race pace is normally more competitive, we just don’t have the qualifying mode that Mercedes do. I hope the start is going to be clean and from there onwards I think we can still have a good race.

“The goal is still to be on the podium. I am also happy for Nico that he has an opportunity to show his pace.”

Team-mate Alexander Albon will start the race on the medium compound after going a different way with his tyres during Qualifying, although the Thai driver will be disappointed to be starting ninth on the grid.

Albon felt good behind the wheel of his RB16 through Qualifying at Silverstone until his final run in Q3, when he lost some of the balance of the car after switching from the medium to the softs.  This cost him some valuable time and meant he was 0.493 seconds away from Verstappen when it mattered.

He admitted there was still time to find within himself as he continues to find comfort and consistency with the RB16, something he has been lacking with since the start of the season.

“I was feeling comfortable and it was looking good up until the final run in Q3 when we went from mediums to softs and I experienced a very different car balance,” said Albon.  “I felt good with the car and I was optimistic going into the last lap but it just completely changed, maybe also with the wind, and I’m obviously not happy with P9.

“Some teams are able to get the soft tyre to work and we struggled with it today, so we need to understand why. I know there’s also time within myself and that’s just about getting more comfortable and consistent with the car.

“Tomorrow will be interesting as there are different strategy options available. Last weekend we showed we have a good race car and the pace to move forward no matter what, so the plan tomorrow is to get the most out of our race pace, make up positions and get the job done.”

Christian Horner, the Team Principal at Red Bull, was impressed by Verstappen’s performance to get into the top ten shootout on the hard tyre, a move that should give the team some flexibility when it comes to strategy on Sunday.

On the other side of the garage, Albon struggled on the soft tyre during Q3, but Horner was happy to see the Thai driver getting more and more confident behind the wheel of the car on the medium compound, a compound that he will start the race with.

Horner says the tyre compounds at Silverstone this weekend has made for a tricky weekend for all the teams, but the strategic options that will come out of the choices should make for an exciting 70th Anniversary Grand Prix.

“Today’s qualifying session was far from straight forward in terms of strategy, with the softer tyres this weekend reacting differently and the optimum compound differing for each team,” said Horner.

“Max put in an impressive lap in Q2 on the hard tyre and is therefore the only driver in the top ten to start the race on that compound, which should afford us more flexibility in the race tomorrow.

“Alex made it through to Q3 with relative ease and looked quick on the medium tyre, improving with each lap, but he was less comfortable with the balance on the soft tyre which proved crucial in the battle for position on the final run and he will line up ninth on the grid for tomorrow’s race.

“With the hotter temperatures, softer compounds and varying strategies, the 70th Anniversary Grand Prix promises to be one to watch.”

Son of an icon: Does Mick Schumacher deserve a seat in F1?

By James Thomas
4 Mins read
The son of seven-time world champion Michael Schumacher, Mick Schumacher currently leads the FIA Formula 2 Championship, but does he really have what it takes to make it in Formula 1?
Formula 1

By James Thomas
3 Mins read
Even after Antonio Giovinazzi crashed out of the race after an eventful restart, Alfa Romeo are happy to bring home some valuable points.
Formula 1

Sergio Pérez: "I think we did really well to maximise the situation to get to fifth"

By Jasmine Butler
3 Mins read
Sergio Pérez battled the field to get fifth but Lance Stroll was on the unfortunate end of a puncture which saw him crash heavily.