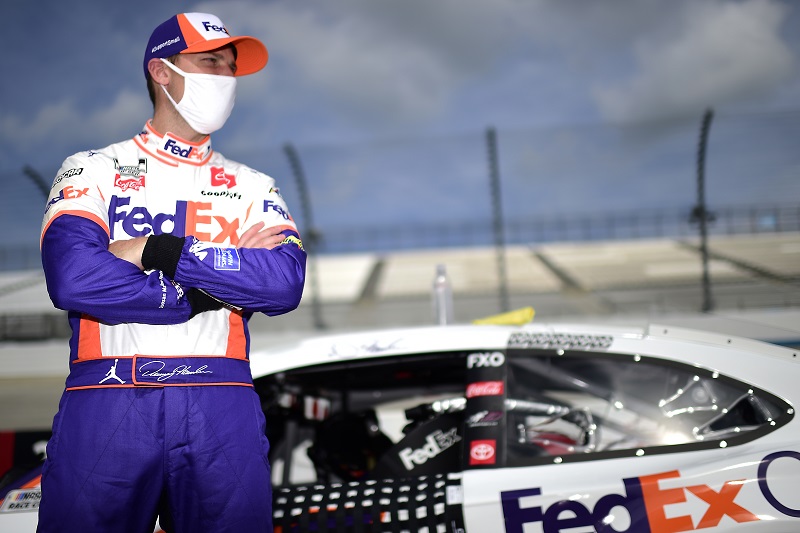 The biggest bomb of the 2021 NASCAR Cup Series Silly Season has been dropped.

On Monday night, Denny Hamlin announced he and basketball legend Michael Jordan will join forces to form their own NASCAR team, fielding a car for Bubba Wallace beginning in 2021. The new team will be locked into every Cup race that year as it has acquired a charter from Germain Racing, which will shut down at the end of 2020. Jordan will serve as the primary owner, while Hamlin holds a minority stake.

Specifics like a name and car number have not been revealed, but due to Hamlin’s ties with Joe Gibbs Racing, it will almost certainly be a Toyota team.

“11 years ago I met Michael Jordan at a then-Charlotte Bobcats game and we became fast friends,” Hamlin began in a statement posted on social media. “Not long after, I joined Jordan Brand as their first NASCAR athlete. Our friendship has grown over the years and now we are ready to take it to the next level.

“Tonight, I’m excited to announce that MJ and I are starting a new, single car NASCAR Cup Series team for 2021. Deciding on a driver was easy – it had to be Bubba Wallace. Bubba has shown tremendous improvement since joining the Cup Series and we believe he’s ready to take his career to a higher level. He deserves the opportunity to compete for race wins and our team will make sure he has the resources to do just that. Off the track, Bubba has been a loud voice for change in our sport and our country. MJ and I support him fully in those efforts and stand beside him.

“More details about the team will be released at a later date, but for now, I remain focused on winning a championship for my No. 11 FedEx Toyota Joe Gibbs Racing team this season and in the years ahead.”

Hamlin, a lifelong basketball fan and current championship contender, is endorsed by Jordan Brand, a partnership that includes the athletic wear company appearing on his firesuits. Jordan also sponsored Hamlin’s truck for the 2013 Kroger 200 at Martinsville; coincidentally, Wallace won that race to become the first black driver to win a NASCAR national series event in the modern era. Even more fittingly, the two of them were team-mates in the race as part of fellow JGR driver Kyle Busch‘s Truck Series operation.

With Hamlin continuing to drive the #11 with JGR, he will be a rare instance of a driver racing for one team while competing against another that he runs, even if he does not hold majority ownership. This concept evokes memories of Dale Earnhardt, who raced for Richard Childress Racing in addition to running Dale Earnhardt, Inc. A present example—albeit a part-time driver—is B.J. McLeod, who owns B.J. McLeod Motorsports in the Xfinity Series while racing for JD Motorsports. Although Gibbs is at the four-car limit, Hamlin may field his team as long as it is not a “fifth” JGR car.

Jordan, considered by many as the greatest NBA player of all time, has an intriguing connection to the racing world beyond just growing up a fan of the sport. From 2004 to 2013, he ran an AMA Superbike team called Michael Jordan Motorsports. He also resides in North Carolina (where he played college basketball) and runs the Charlotte Hornets team, both the home turf of NASCAR teams. During the summer, rumours began to circulate about Jordan’s potential involvement in NASCAR team ownership alongside Hamlin, which were refuted at the time.

Although he might be the biggest sports name ever to dip his feet into the racing world, he will not be the first basketball star to run a team. Brad Daugherty, who played against Jordan in the late 1980s and early 90s, fields two Cup cars under the JTG Daugherty Racing banner; incidentally, Daugherty also attended the University of North Carolina. Basketball Hall of Famer Julius Erving also ran a team in what is now the Xfinity Series from 1998 to 2000.

“We proudly welcome Michael Jordan into the NASCAR family, and look forward to watching Michael, Denny Hamlin and Bubba Wallace compete in 2021,” read a statement from NASCAR. “Michael is an iconic sports figure and celebrated champion whose fiercely competitive nature has placed him among the greatest athletes of all time. His presence at NASCAR’s top level will further strengthen the competition, excitement and momentum growing around our sport. We wish Michael and his team tremendous success.”

While a car number was not announced, Jordan’s famed #23 is unused, having last seen action with the now-defunct BK Racing in 2018. Jordan also wore #45 with the Washington Wizards, which was last used by Petty Enterprises in 2008.

While Hamlin has been one of the top two drivers in 2020 (currently second in points with six wins), Wallace has become one of the sport’s biggest names. Currently in his third season with Richard Petty Motorsports, he has attracted national attention, even from those with no familiar with auto racing, for his vocal support of the Black Lives Matter movement and Confederate flag ban, and the noose investigation at Talladega and attacks from President Donald Trump. The 26-year-old’s newfound reputation would lead to a rise in sponsors with no prior experience in NASCAR, including Cash App, Columbia, and DoorDash.

Wallace, who is currently twenty-third in points with a career-best five top-ten finishes, announced in early September that he would leave RPM after 2020. Speculation surrounding his future included interest from Chip Ganassi Racing, who had offered a contract to drive the #42 that he did not accept as he evaluated his other options; CGR announced Ross Chastain would take over the car next year on Monday morning.

“This is a unique, once-in-a-lifetime opportunity that I believe is a great fit for me at this point in my career,” Wallace tweeted. “I’m grateful and humbled that they believe in me and I’m super pumped to begin this adventure with them.”

Despite the fanfare, the news also comes on a bittersweet note. The new team will race with a charter from Germain, which in turn will shut down after 2020. Germain currently fields the #13 for Ty Dillon, who sits twenty-eighth in the standings. Although Germain has enjoyed success at the Truck Series with two championships, it will lose longtime sponsor GEICO at the end of the year.

“Being an owner in NASCAR for the last 16 years has been a thrilling adventure,” said team owner Bob Germain. “From winning two NASCAR Truck Series championships in 2006 and 2010 to competing at the highest level of motorsports in the Cup Series for the last 12 seasons, I have experienced the highs and lows of our sport. I’m extremely proud of what Germain Racing has accomplished at every level and I will be transitioning out of ownership with many memories and friendships. I appreciate the interest and offers mode over the last couple of weeks and lam excited to see how the sport continues to grow in the future.”

Dillon’s 2021 plans are unknown, but some predictions point toward the RPM #43 set to be vacated by Wallace. RPM maintains an alliance with Richard Childress Racing, whom is owned by Dillon’s grandfather.

The Hamlin/Jordan venture is the second new team set to début in 2021. Justin Marks’ Trackhouse project is also aiming to race next season, though the former driver’s attempts to get a charter have not bore fruit. Germain is also the second team to fold after 2020, with Leavine Family Racing having sold its charter to Spire Motorsports.