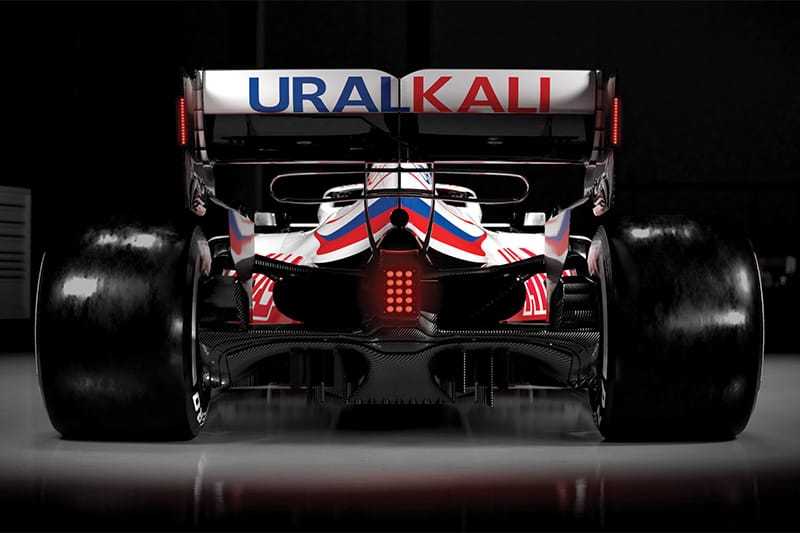 This morning Haas revealed the livery for their car that they will be using in the 2021 season, the VF21. In typical Haas style the first time that the car will be seen physically rather than in images is when the covers are pulled off the car for pre-season testing at the Bahrain International Circuit.

The reveal of the livery, also allowed fans to see the new title sponsor of the team : Uralkali – who are one of the worlds largest fertiliser exporters and importers. The livery is very different to the one that the American team used in 2020, and Haas will be hoping that this livery change, sparks a change of fortunes ahead of the American team’s sixth season in Formula 1.

Gene Haas is very pleased to welcome a new title sponsor in Uralkali to the team, the large scale changes being made title sponsor wise and driver wise, allows Gene Haas to hope that the team can once again compete for points scoring positions.

“I’m very pleased to welcome Uralkali to Formula 1 as title partner to Haas F1 Team, we look forward to representing their brand throughout the season. It’s an exciting time for the team with Uralkali coming onboard and having Nikita Mazepin and Mick Schumacher driving for us. It’s definitely a case of all change but I’m hoping that we get back to being in the mix for scoring some points at these races. It’s been a tough couple of seasons, but we’ve also got our eye on the bigger picture, in particular 2022 and the implementation of the new regulations.”

Haas and the team have their eye on improving performance, especially 2022 when the budget cap comes into place and the large scale regulation changes come into play. For a team that runs on a lower budget like Haas, the upcoming regulation changes will be something that the team will be no doubt be focusing their development on.

“It’s been a tough couple of seasons, but we’ve also got our eye on the bigger picture, in particular 2022 and the implementation of the new regulations.”

Fans of Haas will not have to wait long until they get to see the VF21 out on track, with the fastly approaching pre-season tests at the Bahrain International Circuit now just over a week away on the 12th of March. The VF21’s first race weekend will be at the season-opening Bahrain Grand Prix which commences on the 28th of March.