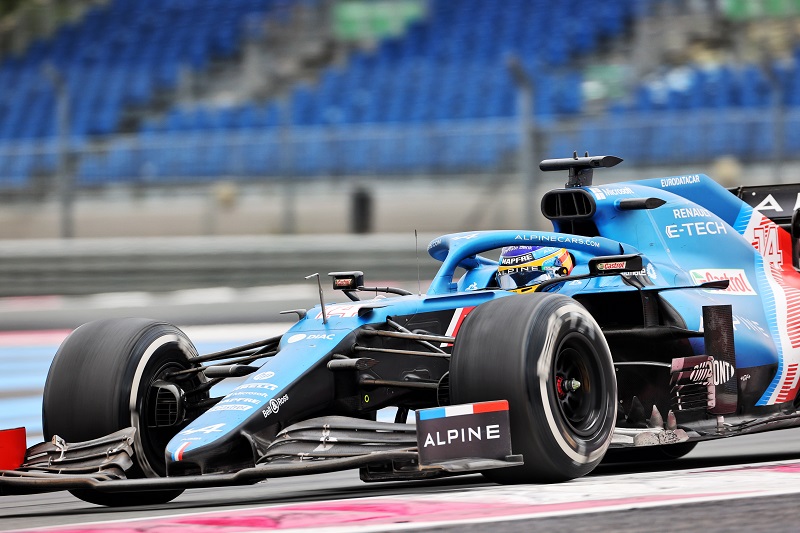 Fernando Alonso admitted the French Grand Prix was a return to the kind of form the Alpine F1 Team had been showing prior to the Monaco and Azerbaijan Grand Prix, and he was happy with his eighth-place finish at the Circuit Paul Ricard.

The Spaniard admitted the tyre degradation seen in France was more than expected, but he was able to manage his race well to secure four points for Alpine in their home Grand Prix.

Alonso finished on the back of the battle for sixth behind both Daniel Ricciardo and Pierre Gasly, but he was unable to make any kind of move on those ahead before the chequered flag fell.

“We started ninth and finished eighth and all in all we executed the race how we wanted, so I am happy with the result today,” said Alonso.  “We weren’t expecting the tyres to degrade like they did and our Medium tyres didn’t last very long at the beginning of the race.

“I was a little bit worried but when we switched to the Hards we showed strong pace and we carried this through to the end and it looked like we might be able to overtake Gasly and Ricciardo ahead in the last few laps.

“We’ve had similar performances at a few circuits now on both Saturday and Sunday, so I think we can be a bit more relaxed that this is our real position and not the one we showed in Monaco.”

“It was not the race we were hoping for” – Esteban Ocon

Team-mate Esteban Ocon was less successful, with the Frenchman fourteenth and feeling like he was missing something compared to Alonso, something the team can find before the double-header in Austria.

Ocon struggled to find the kind of pace needed to fight for points on either the hard or medium Pirelli tyre, and this left him fighting well outside of the top ten.

“It was not the race we were hoping for today and we’ve had a disappointing weekend overall,” said Ocon.  “Today it felt we were lacking something, and we have things to review.

“The pace wasn’t there on either tyre, they were degrading quite quickly, and it meant we weren’t able to push towards the points. We’ll learn from this weekend and move forward.

“The next race is next week, and we aim to come back strongly.”