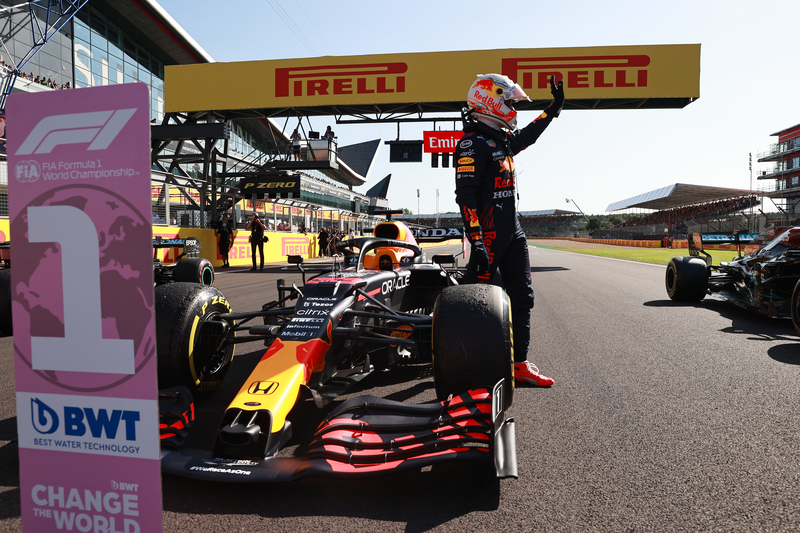 Max Verstappen and Red Bull Racing have broken Mercedes AMG Petronas Formula One Team’s nine-year qualifying dominance at the British Grand Prix, by winning the first ever Formula 1 sprint and being rewarded with pole position for Sunday.

After winning the first ever Formula 1 sprint qualifying, championship leader Max Verstappen will start the main grand prix from pole with title-rival Lewis Hamilton alongside him. Verstappen was quickest off the line from second and led Hamilton going into the first corner at Silverstone. Hamilton didn’t give up easily, the two rivals had an epic opening lap battle, where Verstappen defended supremely. From the second lap onwards it was plain sailing for Verstappen.

The same can’t be said for Red Bull team-mate Sergio Pérez, the Mexican had a poor start from fifth and then span in the opening laps at high-speed coming out of Chapel. The Mexican was caught in the dirty air of Mclaren F1 Team’s Lando Norris. Miraculously Pérez kept his car out of the wall but did drop to the foot of the field. In the closing stages the team decided to retire Pérez, who as a result will start from last place on Sunday.

Team Principal and CEO Christian Horner is extremely proud of Verstappen but is disappointed for Pérez. Horner expects a fight with Mercedes on Sunday.

“It’s fantastic to be starting on pole for the British Grand Prix, which was achieved in a different way with Max winning the first ever sprint qualifying race. This marks our first pole at Silverstone since 2011 and breaks the Mercedes nine-year pole position streak. The race start was crucial for us and Max got a great launch off the line. We knew Lewis was particularly strong in Sector 1 so staying ahead down the main straight was particularly important for us, which he did and maintained the lead until the flag.

“It’s just a shame that we haven’t got Checo up there as well following that high-speed spin when he lost the rear in the dirty air. Thankfully Checo avoided the wall but the level of vibrations were so high we opted to retire him in order to fully check the car over and complete the necessary safety checks, once permission is granted, before the race tomorrow.

“You can see there was very little between us and Mercedes today, we were quicker in the corners where they were mighty in a straight line. The temperatures look set to sore and tomorrow’s Grand Prix won’t be a repeat in terms of tyre wear.

“The higher fuel loads at the start of the race mean the cornering speeds will be slightly lower, giving the tyres an easier workout in the corners at the beginning of the race, so it will be interesting to see how that affects things. It’s fantastic to be staring on pole position and I hope the fans enjoyed the action and a different format of racing today.”