“I expect the race to be a tough one” – Charles Leclerc 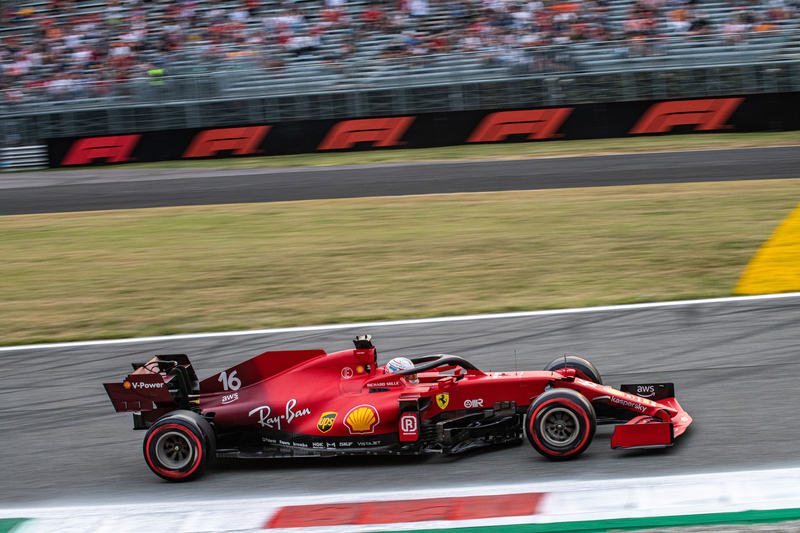 Scuderia Ferrari lock-out third row of the grid for home grand prix, in what was an excellent sprint qualifying for the team after a difficult morning in Italy.

Charles Leclerc and Carlos Sainz Jr are set to start from fifth and sixth for the Italian Grand Prix at the Autodromo Nazionale di Monza, after a well controlled sprint qualifying.

It was a strong sprint for Leclerc, the Monegasque driver made an excellent start to climb above team-mate Sainz into seventh, before being elevated into sixth when Pierre Gasly crashed out on the opening lap. From then on it was a cruise for Leclerc, who despite finishing the sprint in sixth, will start the main race from fifth with sprint winner Valtteri Bottas starting from last after taking an engine penalty.

It was a considerably better afternoon for Leclerc compared to his morning, after feeling unwell during free practice two and being monitored under medical supervision. Leclerc now has his eyes firmly set on the race and is hoping to put in a strong performance in front of the Tifosi.

“We had a good Sprint Qualifying and maximized our potential, finishing 6th and 7th. Due to Valtteri’s penalty, we will each move up a place and lock out the third row of the grid, which is the best we could have wished for. I expect the race to be a tough one, because our competitors ahead have had a strong pace all weekend. Our job will be to score as many points as possible, and if we have a perfect race, we can put some pressure on the four cars in front.

“Tyre management will be a key factor tomorrow, especially on the first few laps where you have to push and are at risk of tyre degradation. We have some useful data from today and will work on finding the best front-wing setup based on that.”

It was a strong sprint for Carlos Sainz Jr too, the Spaniard was lucky to even be taking part in sprint qualifying after a big crash at the end of free practice two left his Ferrari mechanics with a mountain to recover.

The Ferrari mechanics produced a miracle and had the car ready for the sprint, where Sainz had a rather uneventful race. The Spaniard crossed the line in seventh meaning he will start from sixth place for Sunday’s race, his first at Monza for Ferrari.

Sainz is hoping that there will be a chance for strong points on Sunday, as a way of thanking his team for the miracle they produced on Saturday.

“Obviously the crash in FP2 didn’t help our preparation for the Sprint Qualifying. My confidence with the car and around that section of the track was a bit compromised and after lap 1, I focused on regaining that confidence little by little. The start wasn’t ideal either, as I has to brake hard when Gasly went into the McLaren and I was stuck behind them, losing a position there.

“However, I’m confident that tomorrow we will have new opportunities and we’ll do our best to score a good result. Last but not least, I want to thank our great team of mechanics for getting the car ready for the afternoon session. On to tomorrow.“

"It was a lonely but happy third" - Daniel Ricciardo

By Nick Golding
2 Mins read
Mclaren to start from second and third for the Italian Grand Prix after impressive showing by Ricciardo and Norris in Monza sprint qualifying.
Formula 1

"It's going to be an interesting battle" - Max Verstappen

By Nick Golding
1 Mins read
Toto Wolff is hoping that there will be plenty to play for on Sunday, after Bottas won the Italian sprint qualifying in mixed afternoon for Mercedes.