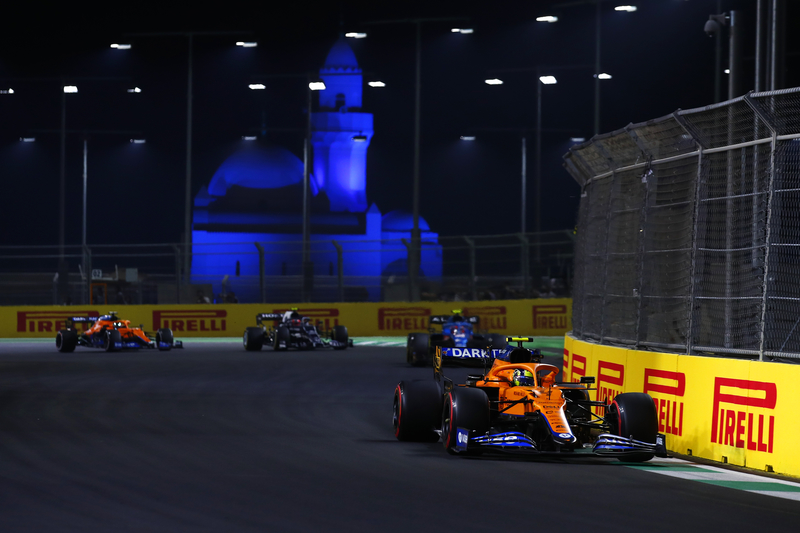 The Mclaren F1 Team suffered a mixed race at the inaugural Saudi Arabian Grand Prix, with Daniel Ricciardo finishing an excellent fifth but with Lando Norris in a disappointing tenth at the Jeddah Corniche Circuit.

In what was possibly the craziest and most chaotic race of the season, Ricciardo capitalised on mayhem ahead brilliantly to launch himself up the field. The Australian was one a few drivers who didn’t pit before the first red flag of the race came out, meaning he gained track position on all those who had pitted before the flag was flown.

Ricciardo kept himself out of trouble and enjoyed a brilliant battle with Valtteri Bottas, before coming out of it second best. The Honey Badger then settled for a brilliant fifth place.

Norris suffered massively during the first red flag of the race after being one of many drivers who pitted before the flag was flown, this dropped the British driver right down the order who had to work his way back up to tenth, which he did in strong fashion. Norris clearly had the pace for potentially a top five finish but was just unlucky on the day.

Team Principal Andreas Seidl was overall happy with the race, after it was the team’s strongest performance for a number of weeks.

“Mixed feelings this evening. However, I’m very happy that, after three very challenging weekends during the triple-header, we’ve responded with a strong performance here in Jeddah. After starting P11 due to his damaged floor yesterday in qualifying, Daniel had a very competitive race to finish P5. Lando made a strong start and unfortunately was very unlucky with the red flag that cost him a lot of positions – but he fought back well for a point.

“A big thank you to everybody: the team here at the track working in very hot conditions, everybody back at the factory and our colleagues from Mercedes HPP. Operationally, we executed a clean race despite challenging circumstances with the red flags, which was vital in order to get the good result we had with chaos all around us. Finally, congratulations on a successful first Saudi Arabian Grand Prix, here at this new and exciting venue in Jeddah. One more to go in 2021: let’s go for it.”