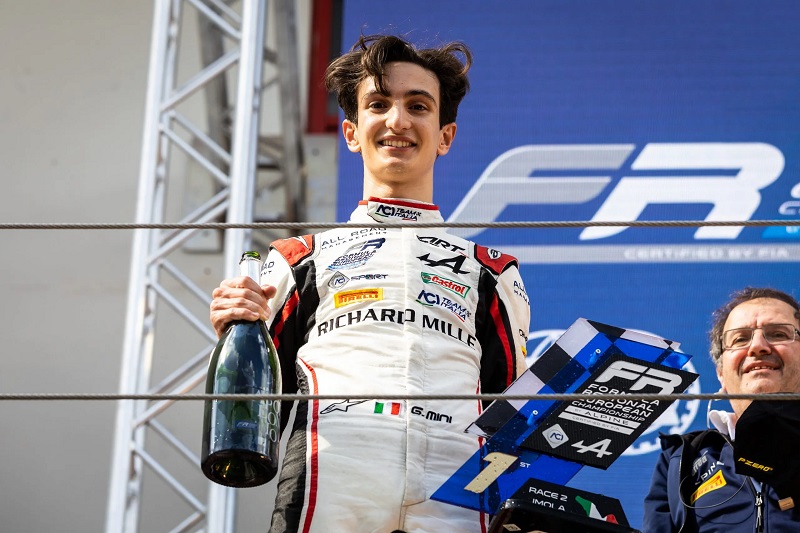 Gabriele Mini put the disappointment of losing out on his maiden Formula Regional European Championship by Alpine victory due to a penalty on Saturday to finally stand on the top step of the podium in race two at the Autodromo Internazionale Enzo e Dino Ferrari on Sunday.

The ART Grand Prix driver was adjudged to have jumped the start on Saturday, with the subsequent ten-second time penalty relegating him from first place on the road to twenty-eighth in the final result.

However, after claiming pole position for Sunday’s race, he did not put a foot wrong despite a race full of disruptions, including a red flag and mid-race downpour.

Rain before the race had seen drivers go to the grid on wet weather tyres, but with the track drying, everyone started on the dry weather tyres, albeit behind the safety car due to the track being wetter on one side of the grid compared to the other.

After two laps behind the safety car, racing finally got underway on lap three, with Mini getting a superb jump on second placed Tim Tramnitz, the Trident driver having impressed in Qualifying earlier in the day to join the Italian on the front row.

It was not long though before Tramnitz was falling down the order, with race one winner Dino Beganovic passing the German around the outside heading into Tamburello, before Michael Belov did likewise at Rivazza.

Kas Haverkort was also a man on the move, with the Van Amersfoort Racing driver passing R-ace GP’s Gabriel Bortoleto for fifth before becoming the latest driver to pass Tramnitz for fourth.

However, the race was soon neutralised by a red flag after a sudden downpour saw Pietro Delli Guanti spin on the run down to Tamburello.  He appeared to be helped into the spin by Prema Racing’s Paul Aron, and he was turned into the path of the Estonian’s team-mate Sebastián Montoya, who ran into the Italian’s car and found himself launched into the air and into the gravel trap.

Behind the safety car, the majority of the field switched to the wet tyres for the restart, and Mini was able to ease away from the chasing pack, which was led by Beganovic.  Tramnitz’s fall through the field continued as he fell behind Bortoleto, Hadrien David and Aron before the chequered flag.

Haverkort pressurised Belov and forced the MP Motorsport driver into a mistake to jump into third, with both Bortoleto and David also finding a way ahead.  However, the safety car was called with the clock running down to zero after Victor Bernier was turned around at Tamburello.

Mini led the field to the line ahead of Beganovic and Haverkort, however, the Spaniard was later disqualified from third due to a technical infringement, which gave Bortoleto the final spot on the podium.

David was moved up to fourth ahead of Belov, Aron and Tramnitz, with Trident’s Leonardo Fornaroli, Monolite Racing’s Maceo Capietto and Van Amersfoort Racing’s Joshua Dufek completing the points scorers.

Dino Beganovic: “It's a really good start of the season, I couldn't have hoped for a better one”

Gabriele Minì on Imola Victory: “It was a tricky race and winning was not easy”

By Paul Hensby
2 Mins read
A false start penalty for Gabriele Mini cost the Italian victory in race one at Imola, with Dino Beganovic profiting to take his second win of the season on Saturday.