Although the season may of ended, Formula Ford stars turned out in force yesterday (Wednesday) at Rockingham for the annual Ford-backed championship’s ‘sampler day’.

Giving the opportunity for the teams to meet drivers looking to enter the series in 2010 and for the drivers themselves to try the many different chassis on offer the main highlight of the day was the prize drives for 2009 championship winner James Cole and runner-up Josef Newgarden.

The two drivers took to the track in a National Class British Formula 3 car, ran by top team T-Sport.

Sam Roach, of championship promoter RacingLine was delighted at with the day “We were very encouraged by the calibre of the drivers attending, and the teams made some useful contacts. The prospects for the coming season are looking very bright.”

Ginetta Junior star and 2009 outright champion Sarah Moore had her first taste of single seaters as she took to the track alongside her younger brother in the DW Racing UK team’s Ray chassis, “It’s been a great experience,” said Sarah, “because the car is totally different to those I am used to driving.” 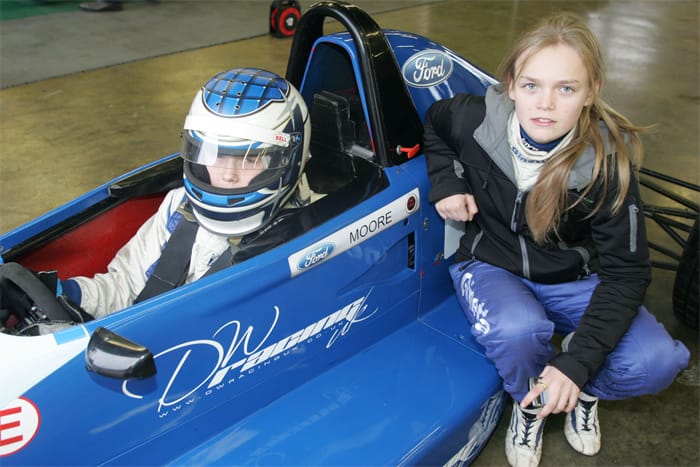 Cole and Moore weren’t the only champions out on track as Ford Fiesta ST Champion David Ellesley put the Mygale chassis of the JTR and Enigma teams through their paces along with Harkesport and Myerscough College Van Diemens as he looks towards a career in single seaters.”To jump straight from a saloon into a Formula Ford was a real culture shock, but an immensely satisfying one,” he said. “Combined with the damp track it was a steep learning curve. Formula Ford would be a great opportunity for me and I am working hard to put a deal together for 2010.”

Occasional 2009 competitor Luke Williams was present running in the ex-Chrissy Palmer Juno Chassis he plans to run in a full season campaign next year. Another Juno out on track was being driven by National FF1600 title-winner Scott Malvern while MSA ‘Kartmasters’ British Grand Prix podium finisher Max Godd drove one of the race-winning works Van Diemens prepared by Fluid Motorsport.

Russell Eacott, team-boss of T-Sport was delighted by the performances of Cole and Newgarden in the Honda-powered Dallara F3 Chassis: “They both showed a lot of maturity and level-headedness. They are both clearly very talented drivers, as you would expect coming out of Formula Ford.”

James Cole has previously tested an F3 car, but for American Newgarden it was a whole new experience: “It’s all completely different and new to me,” said Josef, “but all good! I thoroughly enjoyed the test.”

The day also gave junior karters a brand new experience with cadets from the Trent Valley Kart Club in attendance, getting a feel for Formula Ford and long-circuit racing, being given track rides by Formula Ford race winner Chrissy Palmer along with a look behind scenes in race control.