Despite a troublesome weekend, Alex Lowes described riding in a World Superbike meeting in front of his home crowd as “mega”. The Lincoln youngster was substituting for the injured Jonathan Rea at Castrol Honda and was able to call upon the Northern Irishman's experience during the weekend.

Things didn't fall into place for Lowes though as he crashed out of the opening race before having to pit in the second after struggling on his spare bike. The 20 year old was grateful for the opportunity to race in front of his home crowd and has wished the team every success upon Rea's return.

“I can't really begin to express my disappointment, not just for myself, but for the whole team. After the test last week, I came to Silverstone with high hopes for an improvement over Brno, which was the first time I had seen the bike. It wasn't to be though and we just weren't able to find a setting here that gave me enough confidence in the front end of the bike. I've had a mega experience and it was great having Jonathan [Rea] around this weekend. He's hoping to be back on the bike for the next round and I'm sure he can get the results that the team deserves after all the hard work they've put in.”

The Dutch-based team were competing with two replacement riders at Silverstone after Ruben Xaus injured his back last time out at Brno. His CBR1000RR was initially supposed to go to Karl Muggeridge but the Australian sprained his wrist in a mountain bike accident in the week before the event.

Instead, Fabrizio Lai stepped in and although he was unable to score any points, the Italian was grateful for the experience to ride with the factory Honda squad.

“In race one I thought I could get two or three points but I crashed. I used the soft tyre in the front but it did not last more than three laps, so I had to fight it for a long time. I had to use the second bike in race two, with the harder front. But the different setting with the other bike used up the rear tyre too fast. So it was not the results that I had hoped for, but I am happy to have this experience. It's disappointing for the team, because I would like to go faster, but it was not possible.” 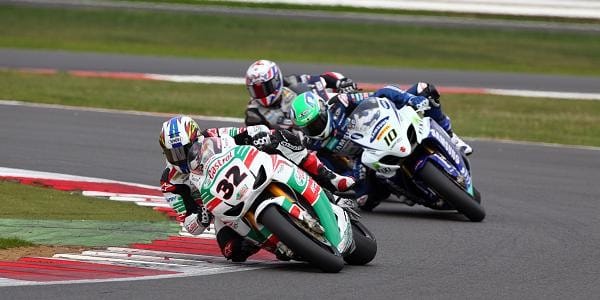 Team Manager Ronald ten Kate thanked both riders for their efforts and is already looking forward to testing at Assen during the summer break as the team look to recover lost ground.

“Not the results we wanted from the weekend, of course, but we still look forward. We have a test at Assen before the end of August, with quite some new parts to try on the bike that should allow us to go faster again.”

“I'd like to thank Alex and Fabrizio for their efforts this weekend. Fabrizio's was a very last-minute booking for Silverstone and he's done quite well, considering it's his first time here and he hadn't seen the bike before he walked into the garage. It was nice to work with him. It's been a good weekend with young Alex, too, with a few ups and downs, of course.”

“Race one was quite promising and he was going forward through the field. Unfortunately, the crash damage to his bike meant he had to use his spare in the second race and that had quite a different feeling. We've really enjoyed working with him and we wish him good luck in his BSB racing.”