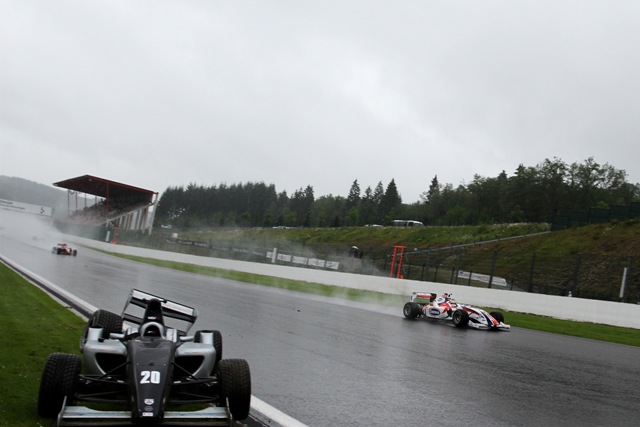 Luciano Bacheta recorded his fifth win of the FIA Formula Two Championship season after the second race of the weekend at Spa-Francorchamps was abandoned due to atrocious weather conditions.

Torrential rain caused the race to start behind the safety car, with polesitter Bacheta leading the field when the race got underway.

The safety car was soon back out again after Daniel McKenzie crashed going into La Source. Under the safety car Christopher Zanella (who had already moved up to fourth past Vittorio Ghirelli and Alex Fontana) ran into Kevin Mirocha, putting Zanella into retirement and causing Mirocha to head to the pits.

There was then a further incident when Formula Renault BARC graduates Hector Hurst and Dino Zamparelli came together.

With the conditions only getting worse, the sensible decision was taken to red flag the race. The 40 minute time limit expired without an improvement, leading to the results being declared after three laps and half points awarded.

Bacheta was the winner, ahead of Saturday victor Markus Pommer, while Mirocha and Zanella were third and fourth with the results counting from before their collision.

“It helped so much being at the front and having better visibility in the spray and my plan was just to get my head down and build up a gap,” said Bacheta, who's points advantage now stands at 40.5.

“I was actually really enjoying it and there was only one place where the track was really bad where there was quite a lot of aquaplaning, but the rest of it for me was ok. I understand though that the rest of the guys had a lot of spray to deal with.

“From my point of view I would have loved to of carried on rather than stop the race because I was enjoying driving and the car felt really good thanks to my engineer who had down a cracking job. I was happy to carry on and the more cars that drove on the track the more water would have gone away but I understand the decision and I’m still happy with the points and the win.”

Pommer said that the visibility was poor for him even with just Bacheta ahead of him.

“The track was only bad on one part but from a visibility aspect it was impossible to drive safe I couldn’t see Bacheta’s lights and even more difficult for the guys in the middle,” said the German driver.

“The weekend has been nearly perfect and I think we now have a good base set up that we can use for the next races at Brands Hatch.”

Mirocha meanwhile had no complaints, until Zanella hit him.

“Today was not a long race and I was hoping to be out there longer as it’s such a good track and I enjoy racing in the wet,” said the Polish ace.

“I pushed hard at the beginning of the race and was able to overtake Fontana and then started to attack Pommer. When the safety car came out I just took it easy but Zanella hit me from behind pretty hard giving me a headache.

“The car’s suspension was badly damaged but I managed to return to the pits. At first I was angry but then the race was stopped and I got P3 which was a bit of luck and a strange way to end my weekend. I’m just looking to have no issues at the next race at Brands Hatch now.”

Fontana was fifth and Ghirelli sixth, ahead of Axcil Jefferies and Matheo Tuscher. Hurst and Zamparelli were classified ninth and tenth.

The fifth race weekend of the season takes place at Brands Hatch on 13-15 July.

By Ashley Hambly
1 Mins read
The FIA F2 and FIA F3 promoters have announced plans for F2 and F3 to join the pinnacle of motorsport at the street circuit from 2023 onwards.
Formula 2

"It's about keeping the progression going" - Dennis Hauger

By Ashley Hambly
2 Mins read
After a difficult start for the 2021 F3 champion, Dennis Hauger looks like he has finally found his feet in the second-tier after back-to-back race weekend wins in the 2022 F2 season.