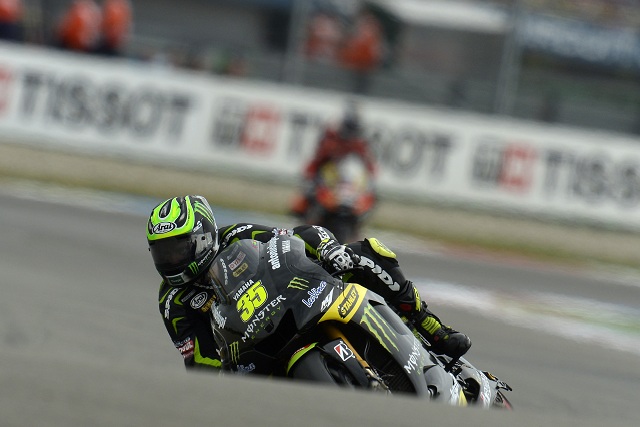 Cal Crutchlow has slammed Hector Barbera for holding him up in qualifying for the Dutch TT at Assen today. The Briton ended up fifth quickest but lost out on the chance to improve when he caught the Pramac Ducati rider who was looking for a tow. Crutchlow was furious with the Spaniard's regular tactic but admitted he'd have taken the result before qualifying.

“I’m happy on one side because to be fifth fastest and on the second row is a good result considering my physical condition and how much pain I have from the left ankle. But I’m upset a little bit too because I’m sure I could have been into the 33s and on the front row, but (Hector) Barbera got in my way on my final lap and cost me some crucial tenths. He was looking for a tow again to improve his lap time like he always does and unfortunately it was me that got caught up with him this time. All week though I have been consistently in the top five and my aim was to be in the top six, so I am not doing badly. We’ll make a decision on which tyre to use tomorrow but we have a little bit of work to do on stopping the bike in a few areas, but we have some ideas to make it better. It will be a tough race with the ankle injury and fighting with Jorge (Lorenzo) is going to be incredibly difficult. He’s got an amazing pace but I am doing the best job I can and will be looking to finish in the top six.”

Monster Yamaha Tech 3 teammate Andrea Dovizioso also thought he could've qualified better than he did after ending up seventh. The Italian said he didn't feel totally comfortable on his final new tyre and chose to play it safe in the end.

“It is a pity to be starting on the third row of the grid because I am sure my potential is much higher. It was a very tricky session with the weather conditions changing a lot, but I am really happy to have done a 34.7 on the hard tyre. We have made some big steps improving my feeling with the front-end of the bike and I am satisfied with my race pace. I am sure I will be able to fight for the podium. I was on the third row at Silverstone but still came through to battle for the podium and that is a realistic goal tomorrow. In the final minutes when I went out on the new rear tyre, I didn’t feel ready to push right at the limit. Going into the first corner I locked the rear wheel and lost some time and because I wasn’t sure if I had warmed the rear tyre up enough, I decided not to take any big risks. I am sure I could have been higher up the grid but I am confident for the race and my Monster Yamaha Tech 3 crew have done a fantastic job again improving the bike in every session.”