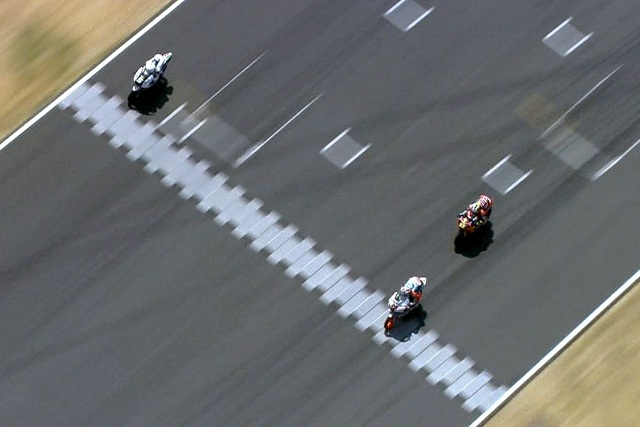 Maverick Vinales won a gripping Italian Grand Prix in a blanket finish which saw the top three covered by just seven hundredths of a second. Home favourite Romano Fenati missed out on a fairytale victory by 0.020s while Sandro Cortese drew the short straw and finished third, although he did have the consolation of retaining the championship lead.

The race, as predicted, turned into a melee of slipstreaming and wild outbraking manoeuvres with Zulfahmi Khairuddin storming from the back of the third row to lead at San Donato, becoming the first of six different riders to lead a lap. The Malaysian was overhauled by Fenati on lap four though before being quickly dropped from the leading group.

Once the race settled down, seven riders were fighting it out for the lead with Fenati losing the lead to Vinales before the polesitter's one lap supremacy was ended by Alex Rins. The Estrella Galicia rider had the advantage for an equally short time as Vinales dived back through at turn one on lap seven. Cortese was in the thick of the action too, as was his KTM teammate Danny Kent, while Niccolo Antonelli and Efren Vazquez had also joined the breakaway.

The 1.141km pit straight was playing host to some spectacular action with riders often drafting from the back of the group to the front, as Fenati demonstrated on lap ten by taking Vazquez who had only hit the front himself seconds earlier. The grandstands erupted at the sight of the Team Italia rider's move while Antonelli increased the euphoria by following through into second. 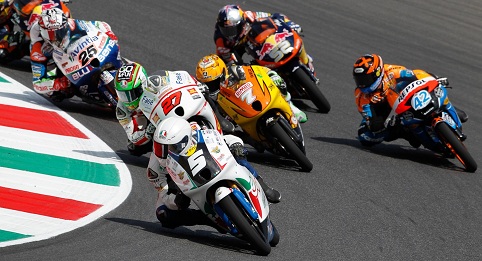 Fenati and Antonelli held an Italian 1-2 but you could hardly call their lead ‘comfortable!’ (Photo Credit: MotoGP.com)

Danny Kent had kept quiet as the others barged into each other but as the race ticked over half distance, he had stealthily crept his way up to third and the extra horsepower of the KTM came into play on lap twelve as he breezed past Fenati at the final corner. At this point, the pre-race favourites had clearly decided they'd had enough of the mayhem and by the time they arrived at the other end of the pit straight, Vinales was back ahead.

The Avintia Blusens rider noticeably upped the pace but Cortese and Fenati had managed to keep up as the top three gapped the riders behind. Kent was now fending off Antonelli, Vazquez and Rins for fourth.

The chaotic racing of the first ten laps gave way to a tense game of cat and mouse but Cortese set the battle alight at San Donato on the final lap, charging up the inside of Vinales. The two both slid wide in an attempt to stay ahead and the canny Fenati sneaked through on the exit but Vinales fought back in sensational style to retake the lead at Casanova Savelli.

Cortese hadn't given up and grabbed second at the final corner but the front three were so closely bunched that all had a shot at victory on the run to the line. Vinales dived over the left of the track to break the slipstream but Cortese followed him, while Fenati kept his FTR-Honda arrow straight on the other side of the road. His tactic nearly worked, but Vinales hung on to win by inches, with Fenati somehow managing to finish in the 0.071s gap between him and Vinales.

Antonelli won the fight for fourth in a similarly close finish with Danny Kent with Efren Vazquez and Alex Rins sixth and seventh. Early leader Zulfahmi Khairuddin faded so much that Jakub Kornfeil beat him to eighth while Hector Faubel rounded out the top ten. Mapfre Aspar teammate Alberto Moncayo was a fourth lap retirement after colliding with Luis Salom with the incident doing serious damage to the latter's title hopes.

Danny Webb battled bravely on his Mahindra but he remains without a point in 2012 after finishing down in 20th.