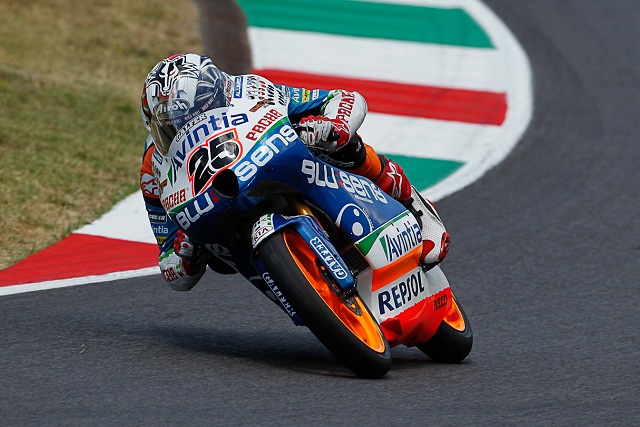 Maverick Vinales showed no signs of a hangover from his nightmare at the German Grand Prix as he topped the timesheets in both Friday Practice sessions at Mugello. The Avintia Blusens rider lost his championship lead to Sandro Cortese after failing to score in the wet at the Sachsenring but with dry, sunny conditions prevailing today he was back on form, lapping in 1:59.676.

Mind you, Vinales' toils paled into comparison to Romano Fenati who qualified last and finished a lap down, but the boost of riding at home clearly paid off for the rookie, who went second fastest. Fenati, riding for the Italian Federation squad, still feels there is more to come ahead of qualifying.

“We’re still working on finding the best setup for the bike. I’m calm and confident, and I hope to do well on my home track.”

Danny Kent's good form continued with third place as the Briton finished as the leading KTM rider on Friday, with Niccolo Antonelli giving the home fans even greater cause for optimism with fourth place, having all-but matched Kent's time of 2:00.046.

Five days after claiming his maiden Grand Prix podium, Alexis Masbou was an excellent fifth for Caretta Technology but the team's mood was dimmed by a crash for Jack Miller on the sister Honda. The Australian was taken away on a stretcher but thankfully he will be fit to ride tomorrow.

Danny Webb's struggles at Mahindra continued as his bike stopped again in FP2, leaving him down in 27th. The Briton has a new teammate this weekend with Marcel Schrotter getting the sack but Italian Championship 125cc frontrunner Riccardo Moretti didn't fare any better, finishing the day in 33rd.