Rossi Eager To Focus Back On Racing 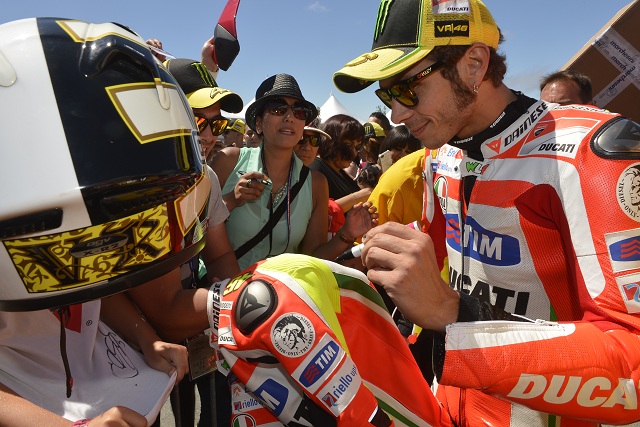 With his 2013 status now confirmed, Valentino Rossi wants to switch the focus back to racing at Indianapolis this weekend. Rossi announced during the three-week break that he will return to Yamaha next season but still has eight races in Ducati colours to complete.

Although Rossi doesn’t particularly enjoy the configuration of race track at Indy, an opinion shared by Casey Stoner, he is relieved to be concentrating on a Grand Prix and leaving the speculation behind.

“This break served as an opportunity to make important decisions for the future, but now I want to return to thinking about the races because we want to improve and during the weekend it’s important to focus completely on what we have to do on the track. Indianapolis isn’t one of my favourite circuits, although I do have a win there. It’s a particular track because it’s one of those that goes in the opposite direction, so the lines are a bit strange in many of the corners. It’s a tricky track, but we’ll try to do our best and have fun.”

Teammate Nicky Hayden is similarly excited about the Grand Prix which lies ahead, given that it’s the closest to his home in Kentucky. Hayden was forced to retire last year with tyre problems but doesn’t expect such difficulty from the surface this time.

“Laguna was fun, but Indy is really my home GP, just across the state line from Kentucky. Hopefully we can do a good result. We struggled more at Laguna than I expected, but Indy is much faster, with more opportunities to open the throttle. It should be nice to ride that track on the 1000s, and it will be fun for the American fans to really get to see them in action. Last season, tyre wear was critical there, but hopefully the pavement will come in a bit better this year. I hope to be competitive starting on Friday, and I’ll definitely be disappointed if we don’t get the best result of the season so far.”