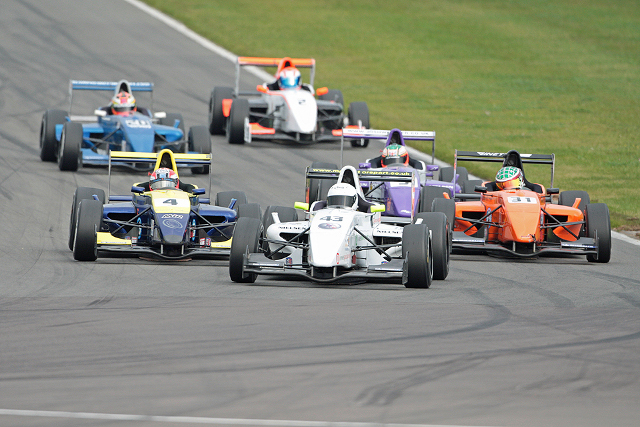 David Wagner secured his first ever victory in the Protyre Formula Renault BARC Championship with a hard fought win in Round 11 at Donington Park.

Wagner became the third driver of the weekend to secure a lights to flag success during a close fought race, with a second place for Scott Malvern extending his championship lead to 23 points heading into the final meeting at Silverstone after chief rival Josh Webster struggled down in sixth.

Wagner, driving for MGR Motorsport, started the race from pole position, joined on the front row by Seb Morris. A getaway for the pole-man saw him lead into Redgate for the first time, with Morris left to fend off Webster and Malvern’s advances behind.

Three-time race-winner Morris was straight onto Wagner’s tail as he looked to add to his victory tally, making a challenge around the outside at Redgate on lap two that Wagner just defended. This bunched the top four up and as they headed into the final chicane, a great move by Malvern saw him pass both Webster and Morris into the turn to take second.

With Webster struggling with what he described post-race as a lack of power from his engine, he went on to lose another place at the next corner to Macaulay Walsh, the Scorpio Motorsport driver passing him around the outside at Redgate, before going on to slide past Morris at the Old Hairpin to move into third.

Morris instantly looked to find a way back past, with their battling bunching up the field behind, with seven cars running nose-to-tail at one stage. Amongst them was double podium finisher from the previous two races Chris Middlehurst, who continued his positive run with a sweeping move around the outside at Redgate to dispossess Webster of fifth.

Ahead, Malvern was beginning to catch Wagner, while Morris had finally found a way back past Walsh for third. Unaware of Webster’s troubles, championship leader Malvern was determined to get his fourth win of the season, closing to within four tenths of a second at one stage.

Wagner held him off though, just as he had done Morris earlier in the race, and crossed the line to take a well-deserved first win. Malvern picked up his ninth podium of the season in second, while Morris made a welcome return to the podium in third, his first since Rockingham in May.

Walsh took fourth to continue his challenge for a top three championship finish, while fifth place for Middlehurst capped off his best weekend of the season so far. Enjoying no such joy was Webster, sixth place leaving him with a mountain to climb if he is to secure the title in seven weeks’ time.

Kieran Vernon finished seventh ahead of Jake Dalton, who had a great battle through the race with Michael Epps. Epps had produced a superb opening lap to jump from fifteenth on the grid into the top ten and had briefly passed Dalton for eighth before eventually slipping back behind to pick up his third ninth place finish of the weekend.

Jacob Nortoft rounded off a strong weekend with tenth, while Hongwei Cao emerged from a great scrap with James Fletcher, Tom Oliphant and Sean Walkinshaw to take eleventh, the battle eventually leading to the retirement of Walkinshaw after contact coming out of Redgate on lap twelve broke his left front wheel, sending him into the barriers. Fletcher finished twelfth, Oliphant eighteenth.

A delighted Wagner told thecheckeredflag.co.uk: “It couldn’t have come in a better way really. Looking back at it, we maybe didn’t get the car set up to my driving style until recently. Now we’ve got a set up that works, my feedbacks improved and that’s been the difference. We were strong at Croft, we’ve been strong all weekend here and it’s fantastic to finally win.

Championship leader Malvern commented: “I always knew it was going to be a scrap from fourth and it was, the first couple of laps especially with David [Wagner] backing it up nicely for me. I made a bit of a Formula Ford style move into the chicane to get second, I was well pleased with that. The pace was good again, it’s taken me a while to get to grips with the car but I feel confident now and I’m looking forward to Silverstone.

A dejected Webster added: “I was expecting to be closer to the front today, but I was suffering from a definite lack of power. Every straight I went down, the engine just sat, I’m wasn’t even getting to sixth gear on the back straight, so I just got passed left, right and centre. I could make it up through the corners, but got left behind on the straights. Whatever is needed to be changed before Silverstone will be and hopefully we should be back like we were in race one here, winning races and challenging Scott [Malvern].”