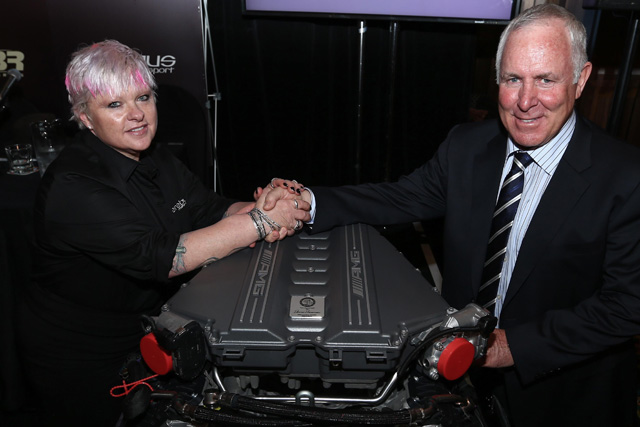 Mercedes-Benz is set to join Holden, Ford and Nissan on the V8 Supercars grid after the announcement that Stone Brothers Racing will form an alliance with Erebus Motorsport to run three AMG-prepared Mercedes-Benz entries from 2013.

Stone Brothers Racing also confirmed it will end its 15-year association with Ford after a relationship that began when the team was first formed in 1998 and won three Championships with Marcos Ambrose and Russell Ingall.

“Since SBR’s inception in 1998 Ford has backed the team and together we have enjoyed many successes including three Championship wins – two with Marcos Ambrose in 2003 and 2004, and again with Russell Ingall in 2005.  We also won Bathurst with Jason Bright and Steven Richards in 1998,” Stone said.

“Leaving Ford was not an easy thing to do, but as car markets change here in Australia I felt the time was right for a new challenge and with Ford’s mutual agreement we have decided to part ways.

“We will be racing a Ford Falcon for the last time at Olympic Park in December and will see out our contract which ends this year. I’d like to thank Ford and all our supporters for their backing and we now look forward to entering a new era of racing with Erebus Motorsport.”

The three-car outfit will be run as a privateer team operating under a Customer Sports Program of AMG. There has already been significant work on engine development and a team of engineers have been tasked with the project of developing a V8 Supercar specification 5.0 litre engine and the bodywork of the 2013 cars. The very first engine was unveiled at today’s announcement, based on Mercedes’ M159 powerplant, with the chassis expected to come from the E-Class model range.

While the entry has been approved of by Mercedes-Benz Australia, there is no direct involvement or funding from Mercedes-Benz or AMG (Mercedes’ performance arm). The entire project is to be funded exclusively by Erebus Motorsport which already has an association with AMG through its involvement in the Australian GT Championship in which it runs SLS AMG GT3s.

Maddison and Klimenko see great opportunities with the marque in the sport.

“There has been much speculation over what Erebus Motorsport, AMG and Mercedes-Benz were doing in relation to the Car of the Future – and we haven’t been in a position to say anything about this until right now,” said the Erebus Motorsport CEO.

“Our entry into V8 Supercars is an entirely Erebus Motorsport funded initiative as a private race team that is accessing the Customer Sports program of AMG.

“There is a lot of work required between now and the first event next year; by no means will it be an easy road with V8 Supercars being such a highly competitive environment.

“We do not underestimate the task ahead as a new team in V8 Supercars, but we have the expertise and experience of SBR which is considered to be one of the best teams in V8 Supercars. They are a professional outfit and know how to win races and Championships; we see a perfect fit for Erebus Motorsport.

“We have been assessing our options for access over an extended period, as the category is so competitive it has been a move with very specific requirements on our behalf. SBR have for a long time been a strong and consistent performing team with their engineering also being a benchmark in the categories evolution and parity based success.

“I have absolutely no doubt that the hard work that everyone here, in Germany and at SBR have put into this so far will be rewarding. The entire Erebus Motorsport team is proud that today we can make this announcement.”

With most V8 Supercar teams either already on track or about to be on track with the 2013 Car of the Future models, V8 Supercars Chairman Tony Cochrane says the sport was never in better shape to maintain its high growth curves domestically and internationally.

“Having Erebus Motorsport combined with SBR on the grid says much for the evolution of V8 Supercars to an internationally recognised brand,” Mr Cochrane said.

“With the customer sports support of AMG, the marque joins another world-wide giant in Nissan in our Championship under the Erebus Motorsport and SBR partnership, further demonstrating that our sport is truly on the international stage.

“We are an extremely popular sport worldwide and arguably one of the most respected motorsport categories internationally. This is largely due to our professionalism, safety first approach, fantastic events, technological prowess, spectacular racing and our hugely respected teams and drivers.”