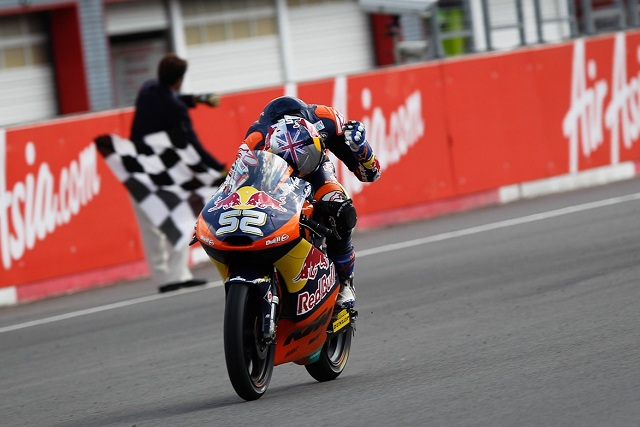 Danny Kent emerged unscathed from an incident-filled final lap at Motegi to claim his first Grand Prix victory, preventing his irate teammate Sandro Cortese from clinching the Moto3 title. The German was in position wrap up the championship before Kent dived past him two corners from home with Cortese then coming together with Alessandro Tonucci in the aftermath. As a result, Maverick Vinales sneaked through to grab second with Tonucci finishing on the podium for the first time.

Kent was part of the leading group throughout with Jonas Folger coming through from the third row to lead a six-man pack. After some shuffling in the early laps, Kent slotted in to second with Tonucci third ahead of Luis Salom, Cortese and Vinales.

From fifth on lap fourteen, the championship leader began picking off the riders in front of him with a succession of moves at turn five. Salom was the first victim before Tonucci surrendered third while Danny Kent was unable to prevent his teammate surging through either. Unfortunately for the Briton, Tonucci would bump him back down to fourth and the no.52 would start the last lap in fifth thanks to a turn five move from Luis Salom.

Salom’s aggressive intentions wouldn’t stop there though with the Spaniard going for broke at the start of the last lap. Leaving his braking ridiculously late, Salom attempted to gain three places missing out Tonucci and Cortese, and slammed straight into the side of Folger eliminating the pair of them in the turn one gravel trap.

After entering the race with a long shot at clinching the title, Cortese was suddenly half a lap from glory with the chaos handing him the lead ahead of Kent and Tonucci with Vinales fourth. Kent was in no mood to follow home his team leader and buried himself in the slipstream coming down the back straight while Tonucci, also chasing a maiden victory, lined up both KTMs.

Kent left his braking marginally later than Cortese and grabbed the lead into turn ten but things went from bad to worse for Sandro as Tonucci also barged through. In an attempt to keep the FTR-Honda back, Cortese gave it everything on the exit of the corner but the end result was contact, sending the German to the floor.

Kent was clear of the drama and took a superb victory while Vinales profited from the last lap mayhem to snatch second with Tonucci an excellent third. Having failed to keep up with the leading group, Alex Rins and Zulfahmi Khairuddin had to make do with fourth and fifth while Cortese remounted to finish sixth before petulantly berating his victorious teammate on the slowing-down lap.

Miguel Oliveira held off Louis Rossi for seventh with Efren Vazquez and Romano Fenati completing the top ten but John McPhee couldn’t join them in the points after running off-track on the opening lap. The Scot recovered to 21st, five places ahead of Mahindra’s Danny Webb.