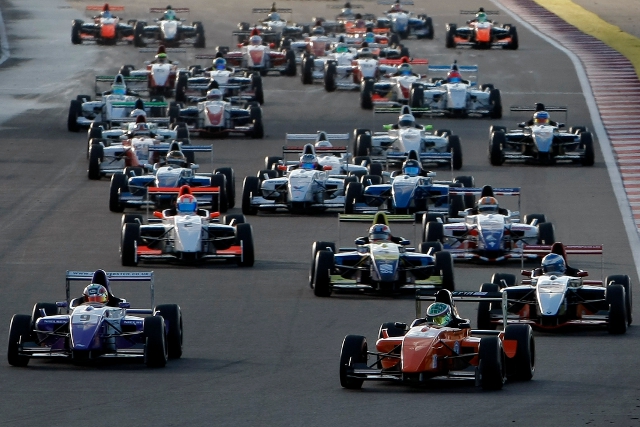 Organisers of the Protyre Formula Renault Championship have confirmed an expanded 16 round calendar for 2013, featuring four ‘triple-header’ events and a return to the BTCC package for its season finale.

With no return for the Formula Renault 2.0 UK series next season, the category will no longer use its ‘BARC’ tag, with the series now known as the Protyre Formula Renault Championship to highlight it’s growing reputation in UK single-seater racing.

The cost-effective championship retains its six-weekend calendar for 2013, but the introduction of four ‘triple-header’ weekends means an increase of two rounds on 2012.

Starting at Donington Park in April, the series will then visit Snetterton, Thruxton, Croft and Rockingham for the four consecutive ‘triple-headers’, before finishing once again in support of the Dunlop MSA British Touring Car Championship at Silverstone, like it has for the past two seasons.

“We’re very happy with the calendar we’ve agreed with our teams and the BARC and delighted to have once again secured a support slot alongside the BTCC for our championship finale, we’re very grateful to Alan Gow [BTCC Series Director]”, said Protyre Formula Renault promoter Simon North.

“We’ve been working hard to try and offer even greater value for drivers and teams and with a 16 race calendar, four triple-header events and a BTCC support date I think we have an extremely strong package to offer. Our Tatuus Formula Renault 2.0 is well proven, reliable and a fantastic car in which to learn. After a sensational 2012, we’re very much looking forward to the 2013 season.”