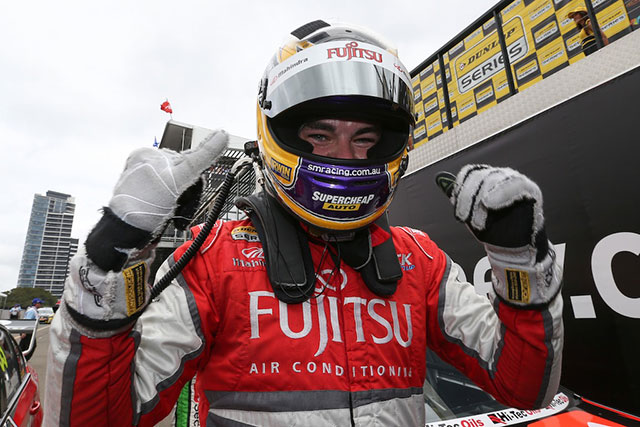 Fresh from being crowned as the youngest ever winner of the Dunlop Series Championship, Scott McLaughlin has today been confirmed as one of Fujitsu Racing GRM’s drivers for the 2013 V8 Supercars Championship.

McLaughlin has signed a multi-year deal to drive with the Garry Rogers Motorsport outfit and will replace Michael Caruso (who is linked with a move to Nissan Motorsport) in the #34 entry next season.

The news caps off an incredible year for the 19-year-old who won the inaugural SuperTourers Championship in his native New Zealand, before claiming the (V8 Supercars Development) Dunlop Series title with Fujitsu Racing at Sydney Olympic Park last weekend.

The Sydney event also saw McLaughlin step up to the main series for his solo V8 Supercars debut as a last-minute replacement for the ill Alexandre Premat in Sunday’s final championship race. McLaughlin stayed out of trouble coming home in 17th place.

GRM team owner Garry Rogers was impressed with McLaughlin’s drive and is pleased he has chosen to join his squad.

“We’ve been keeping an eye on Scott for some time and his on-track approach has been very impressive,” said Rogers.

“He’s a level-headed young man who has shown great race craft and I was very impressed with his endurance racing this year, while his Dunlop Series championship speaks for itself.

I think Scott will gel well with our boys and his experience driving the prototype Car of The Future last year will also be advantageous going forward.”

McLaughlin made his V8 Supercars Championship debut earlier this year as co-driver to Jonathon Webb in the endurance rounds. The pair finished tenth at the Dick Smith Sandown 500 and sixth at the Supercheap Auto Bathurst 1000. Having set himself the goal of a full-time championship seat for 2013, McLaughlin is delighted with the deal which will also see him complete the final year of his trade apprenticeship with the team.

“This is what I have been working towards since moving up from karts in 2010 and the championship in my third year was always my focus, so to be picked up by Garry and his team and to be able to continue my relationship with Fujitsu is just fantastic,” said McLaughlin.

“I started with SBR working in the race shop and it was a great insight into understanding the cars.  To complete my fabrication apprenticeship within a race team will be really valuable.

“Garry is a no BS type operator and the whole GRM environment will see me well prepared going into the 2013 season.  I’ve had the most amazing year this year so this just caps it off perfectly and can’t wait to get started with the team just as soon as I can.”

McLaughlin will get his first laps in one of Garry Rogers Motorsport’s Car of the Future Holden Commodores at Winton this Monday.