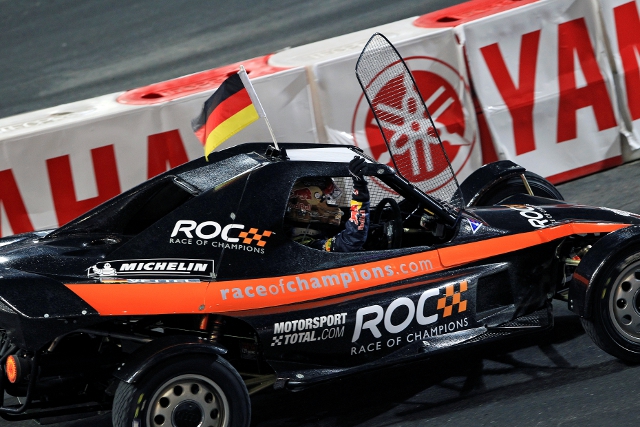 Team Germany eased to a superb sixth consecutive Race of Champions Nations’ Cup title, Sebastian Vettel and Michael Schumacher winning every one of their races to continue their streak into the event’s debut in Thailand.

“Even Michael hasn’t managed six titles in a row before so this is something special,” said Vettel. “Six years is a long time and now we can look back and know we’ve won for the last six years. We all love coming here as it’s a special event. It’s a privilege and an honour to race with these guys. There’s one thing that connects us all, which is racing. Now I can look forward to tomorrow and hopefully stay in the competition as long as possible. I’ve tried that for the last five years and haven’t succeeded yet so it would be nice to put my name on that trophy too.”

The German duo, representing ten F1 world championships between them, blew through the competition the racing ending against Team France in the final. Schumacher put the defending champions ahead, beating Romain Grosjean, Vettel securing an insurmountable lead in the best of three final by beating Sebastien Ogier, who will defend his individual Race of Champions title on Sunday.

Grosjean and Ogier had had a tougher route to the final, having to win through from a Group A that also included Team GB, Team All–Stars and Team Americas.

Though they topped the group both man tasted defeat, Grosjean having to be bounce back after losing out to David Coulthard of Team GB by mere fractions of a second in the first racing bout of the day, Ogier meanwhile won his first two races against Coulthard’s partner Andy Priaulx, then Jorge Lorenzo, the MotoGP champion one half of Team All–Stars with Tom Kristensen.

His defeat came at the hands of another rally driver – Production WRC winner Benito Guerra. Team France’s passage to the semi-finals was already booked, but the Mexican’s win in the final race of the group but he and Team Americas teammates Ryan Hunter–Reay level on three wins with the All-Stars pairing, Lorenzo and Kristensen going through to the semi-finals on a tie-breaker. With just one win each Priaulx and Coulthard were early casualties in the competition.

The Germans had almost unarguably the easier group, the draw putting them against the pairing from Australia, as well as India and Thailand, the two nations whose drivers won through to the main draw from the ROC Asia event the previous day.

A day’s experience racing on the track laid out inside Bangkok’s Rajamangala Stadium proved to be little use for the Asian nations as the Australians, multiple V8 Supercars champion Jamie Whincup and motorcycle legend Mick Doohan, followed the Germans through to the semi-finals. Tin Sritrai, however, gave the home crowds something cheer, taking the Thai team’s only victory against Doohan.

Three wins in the group stage – to two from Team India and one from the home nation – saw the Aussie’s through to the semi-finals, facing team Germany again.

The semi-final match-ups were a repeat of the group stage races between the two countries, Schumacher against Whincup, Vettel against Doohan. The results were the same also, the German pairing winning both races to continue their way to the final – and to victory.

The French drivers to, would go through to the final in ‘straight sets’ against the All-Stars, but their success would come to a sudden halt in the face of German might.

“We knew going up against Team Germany was the toughest moment of the evening,” said Grosjean. “But we fought as well as we could with what we had in our hands. Last year we reached the semi-final, this year the final. Now the next step is to be on the top of the podium. They want to go for seven next year but we want to go for our first one in the future. For now it’s great to have brought the blue, white and red flag to the final.”