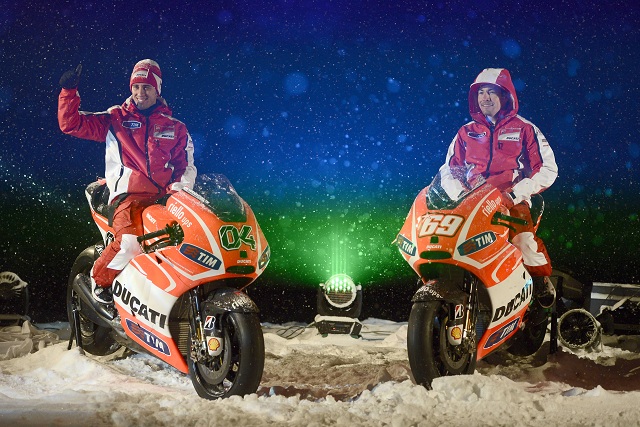 Ducati have officially unveiled their new GP13 machine at the 23rd annual Wrooom ski event, along with the four riders charged with the task of returning them to the front of the MotoGP grid. The official factory team are represented by Nicky Hayden and Andrea Dovizioso while the factory-supported Pramac team will field Ben Spies and class-rookie Andrea Iannone.

New Ducati Corse general manager Bernhard Gobmeier was also in attendance at Madonna di Campiglio and spoke to the media about his first impressions of the Bologna-based squad and the challenge facing him in the upcoming season which starts in Qatar on April 7th.

“Firstly, the way the company welcomed me was overwhelming and I felt like being introduced to a big family. The first impressions on the human side were exceptional and this will of course help to create a good motivational basis for working together, allowing us to dedicate all of our resources towards the brand, the company and the project.”

“The challenge that lies ahead is a big one and everybody is curious as to what we are going to do to close the gap to our rivals. We must work in a lot of different areas where we can make the difference. We have already made some positive changes to the team structure, and we have some ideas for the development of the bike. I prefer to speak about evolution rather than revolution and with this in mind first we want to evaluate the material developed in the second half of last year. I think that with this approach we can improve the performance of the bike in the short term but we are also working on new solutions which down the road in 2013 will be implemented into the race bike.”

The newly-named Ignite Pramac Racing Team will have much closer links to the factory outfit than in the past Gobmeier hoping the set-up will allow them to “gather more information and input for development”. This spells good news for Ben Spies after his switch from Yamaha and the American is relishing the challenge.

“I am excited to be a part of the Ducati family. This is something I’ve wanted from the beginning of my racing career. My team and I have our work cut out for us and new goals to meet, but we’ll benefit from factory support and Audi coming on board. Ducati has four strong riders with different styles, which should improve the Desmosedici and bring it back up to the top where it belongs.”