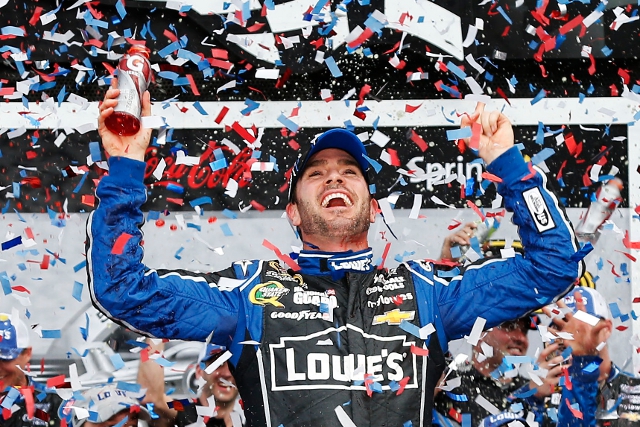 After barely completing a lap last year before a crash put him out of contention Jimmie Johnson took a second Daytona 500 win, the five time Sprint Cup champion adding success to start 2013 to his 2006 win.

Johnson led the one line on two late restarts, against the patched-up #2 Ford of Brad Keselowski, carrying damage from a crash earlier in the race. NASCAR’s new ‘Gen 6’ car delivered a very different style of racing to that of recent restrictor plate races at Daytona International Speedway and Talladega Superspeedway. Gone was the tandem ‘push drafting’, replaced by a high speed game of inches as opposing trains of cars crept back and forth on one another.

The higher line was dominant throughout, a significant portion of the race spent with almost the entire field in single file.

After Keselowski led the field to the green flag on lap 181 after Jeff Burton clouted the wall entering the tri-oval, bringing his day to an end Johnson inched ahead, leading when the yellow flag flew ten laps later for the sixth and final time for debris.

On the restart Keselowski’s inside line was no match for the outside train headed by Johnson, serial second place finisher during Speedweeks this year Greg Biffle and pole sitter Danica Patrick. As Keselowski fell further and further back no-one seemed willing to chance a move out of single file to take to the low line and challenge for the lead.

Johnson led past the white flag to start the final lap, and could have secured the win to a few miles early when Travis Kvapil crashed through turns one and two. However, the green flag remained out as Kvapil and the others involved continued on while, at the lead of the pack Dale Earnhardt Jr. shot to the inside line propelled by Mark Martin. Their surge coming just as the draft between the lead trio coming apart they had the momentum to pass both Biffle and Patrick before turn three, but Johnson pulled down ahead of Earnhardt, cancelling out their momentum and leading Earnhardt and Martin across the line. Keselowski finished fourth and Ryan Newman completing the top five.

After running second and third just 2.5 miles earlier Biffle and Patrick finished sixth and eighth respectively, Patrick’s result the best ever for a female driver in the Daytona 500 completing her historic run in the Daytona 500 in which she also became the first woman to lead a green flag lap in the race’s 55 year history.

Thankfully, given the dramatic end to the Nationwide Series race the race was relatively crash free, with only two of the sixth cautions brought out by multi-car accidents. The first struck just 32 laps in when Kyle Busch turned Kasey Kahne triggering a crash that took out race favourites Tony Stewart and Kevin Harvick among others, the crash bringing Harvick’s stellar week at Daytona in which he won both the Sprint Unlimited and his Gatorade Duel qualifying race to an abrupt end. The RCR driver, did however appear to spin on his own, the #29 suddenly snapping loose as he slowed down to avoid the accident evolving just ahead.

Harvick and Stewart were not the only potential winners to have problems. Jeff Gordon led the race early on, jumping to the lead ahead of Danica at the initial start but battled over-heating problems for much of the race, started by a price of paper on the front of his car while leading.

Matt Kenseth, in his first race for Joe Gibbs Racing, looked likely to join the select group of drivers who have successfully defended their Daytona 500 crown. He led 86 laps – the most of anyone on the day – before a blown engine forced him out of the race. He was followed – almost on the next lap – by new teammate Kyle Busch with the same problem. Martin Truex Jr., also in a Toyota but for Michael Waltrip Racing also hit engine problems late in the race.

After suffering damage nosing into already crashing cars in the lap 32 crash Keselowski narrowly avoided a more serious involvement in a second accident, when he was tapped sideways by Trevor Bayne. Keselowski – somehow – kept his car straight while Bayne span to the outside, collecting Carl Edwards, Terry Labonte, Ricky Stenhouse Jr, Austin Dillon and all three Front Row Motorsports Fords.

The victory was the perfect start for Jimmie Johnson on his quest to take back the Sprint Cup title, and was not only retribution for his disappointing Daytona a year ago, but also gave long-term Crew Chief Chad Knaus a first trip to a Daytona 500 Victory Lane after he missed his 2006 on suspension after the #48 failed a technical inspection earlier in the Daytona race weeks.

The Sprint Cup field now begins the season in earnest, a cross-country trip to Phoenix for the second round in the week ahead where the real test begins not only for the drivers but also for the new cars.

By Justin Nguyen
2 Mins read
Spire Motorsports’ #77, piloted by Josh Bilicki, will feature “Slava Ukraini” and adorned in blue and yellow as part of a sponsorship from the Ukranian American Coordinating Council, who is providing armour and aid for the country’s civil defence units.
NASCAR Cup Series

By Justin Nguyen
3 Mins read
This surely won’t be controversial. In response to contact that squeezed him into the wall, Joey Logano bumped William Byron with two laps remaining for the win at Darlington.