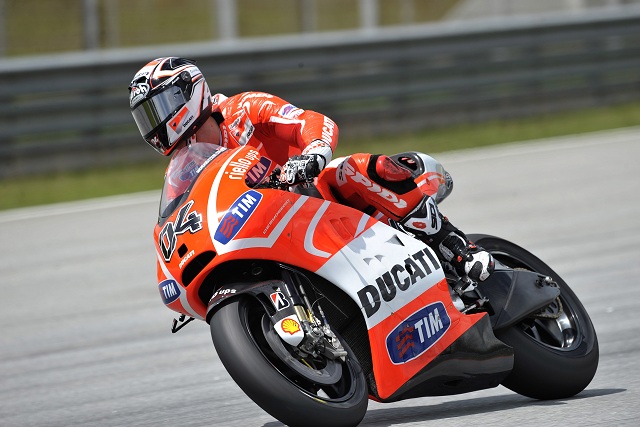 Andrea Dovizioso said the feeling of the Ducati GP13 was much improved on the first day of the second Sepang test compared to his previous experience on it three weeks ago. The Italian was just 1.2s down on pacesetter Dani Pedrosa in eighth place, the closest he and the team have been all winter, and is hopeful the road to recovery has begun.

“I’m pretty satisfied with today. My feeling with the bike has improved, and now I know it better than I did two weeks ago here at Sepang. Today we did tests with the electronics, and we also made a comparison between two bikes with different configurations—one had a different fuel tank and weight distribution—but we didn’t have much time. It was nothing too major, but it was a positive step. I used just one set of tyres, so all things considered, the gap to the top is acceptable. That said, we still have to work hard on corner entry and corner speed.”

Teammate Nicky Hayden was close behind Dovizioso in ninth and also cited the changes to the weight distribution as a positive step and hopes to make further inroads towards the leading pack as the week unfolds.

“It’s good to be back to work in Malaysia. This morning we lost a bit of time sorting out some electronics mapping, but then we were able to do some good riding. Ducati brought a couple of things to try, mainly some changes to weight distribution, which helped make the bike a little nimbler on change of direction. Also, I’m able to brake better with the same amount of pressure on the lever. We still need to work on it, but anyway, it’s an improvement. With the weather, we obviously didn’t get a full a day with a dry track, but it was important for me to ride in the wet. We know the gap to the front is still too big, but we’re slowly making progress, and hopefully we can reduce it further over the next two days.”