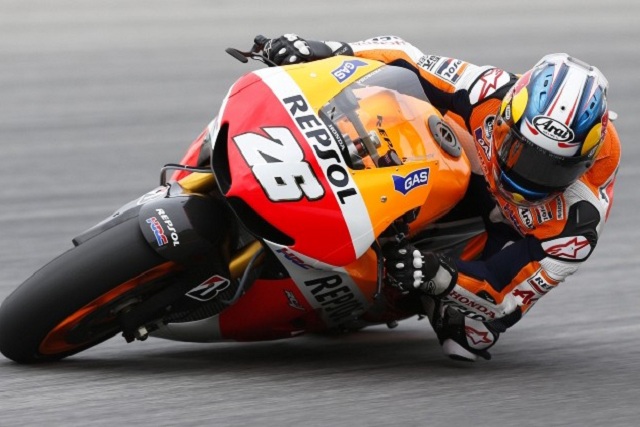 Dani Pedrosa was heavily encouraged by the start Repsol Honda made to 2013 after topping the timesheets on all three days of the Sepang test. The Spaniard improved on all three days, finishing with a time quicker than the 2012 pole position, and says the team have learned a lot about the new features of the 2013 package.

“We can leave Sepang with a good feeling, because we had good lap times on all three days. We were able to put in a lot of laps and, above all, try out some important things with the engine and the bike weight to adjust to the three kilos more for this season – dictated by the new rules. Today we focused on rear tyres, in particular the new Bridgestone hard compound. It is similar to the old one with a little more grip in some areas, but it also creates more chatter. We finished the test well and hope to continue like this in the following ones”

Teammate Marc Marquez was fourth quickest on a day where he suffered his first MotoGP accident, crashing at the final corner this morning. The 19 year old still described the test as a success though given his speed over the three days and expects to only way to be forward from now on.

“I am very happy with the results that we have had from these three days, above all because I gradually got more consistent with my times. This was what we were looking for from this test. Day by day we improved our times, but this is secondary really. The important thing is that we made our first race simulation, which has helped me to understand the class and the bike better and his given us a lot of information for the next test. We also had a first crash, which luckily was fairly light. I lost the front on the brakes, but I was unhurt and the overall verdict on the test is still very positive”