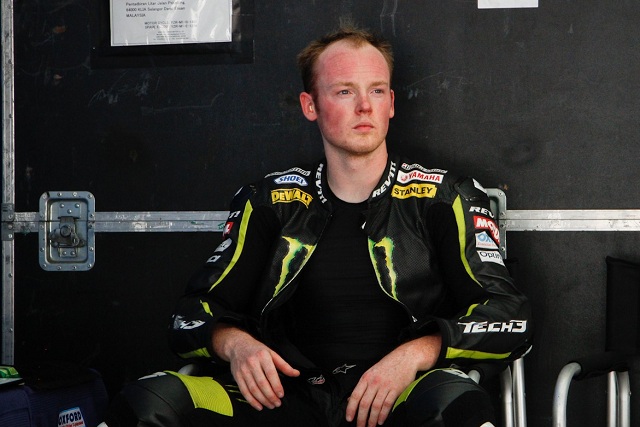 Bradley Smith is confident he will be at the level he desires to be at in Qatar after an improved performance on day two in Malaysia. The Briton remained tenth overall but found 1.6s overnight and avoided the kind of accident which blighted his opening day. Smith was impressed with the pace of the leaders, particularly Yamaha’s Jorge Lorenzo, but believes he will be closer to the front by the time he gets to Qatar.

“After the crash yesterday I am feeling much happier today, though I’m a little bit wary of some things that happen with the front and that can play on your mind a little bit. But the track has more grip and my feeling with the bike is much better. Today I worked a lot on my braking technique because I’m being too cautious at the moment and not using the carbon brakes as they need to be used. We played around with some different settings today too just to gain more of an understanding about what direction we can take in the future if we have certain problems. I think Jorge is doing exceptionally well riding around consistently in the 2.00 bracket because all of the other guys seem to be in the 2.01s. He is on another level at the moment but to be honest I feel quite good doing consistent 2.02s. We are working for Qatar and the first race rather than lap times now. It is not easy that’s for sure but I am confident soon it will start clicking into place and we will start rolling forward.”

Monster Yamaha Tech 3 teammate Cal Crutchlow was an outstanding third as he focused on refining his satellite Yamaha without the developments of the factory YZR-M1s. Crutchlow didn’t put too much stock in his position at the end of the day but thinks there is more time to be found yet.

‘There didn’t seem to be a lot of grip out there again today although the lap times have improved a lot. We tried something different with the front fork setting, which was in a similar direction to what Jorge (Lorenzo) uses and there were some good and bad points like with most things you test. I’m happy with my pace because we’ve tried a couple of different settings and we need to work on fine-tuning the best one. The main goal has been trying to stop the front of the bike lifting so much when I change direction on the throttle. The bike feels quite heavy so we need to reduce how much the fork comes up without sacrificing too much in another area like the braking. I’m sure if I had put in some new tyres at the start of the day I could have gone faster. But I waited to use mine around lunch and I still went faster, even though the track temperature was much higher at that point. I’m not really too concerned about the times though. I’m just concentrating on making the package we have got better for the first race in Qatar.”