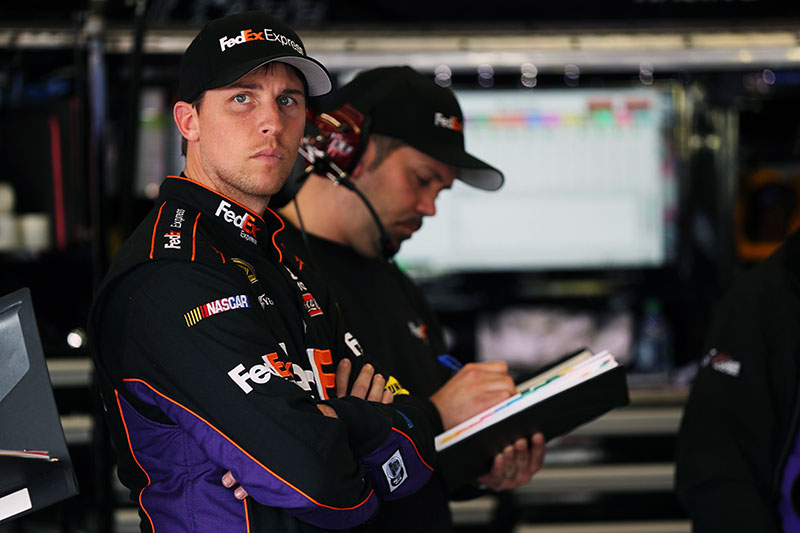 Denny Hamlin has dropped his appeal of a fine from NASCAR for criticising the new car, however he still will not pay the $25,000 bill.

Hamlin was fined by NASCAR for speaking out about the new Gen-6 Sprint Cup car after the Subway 500 at Phoenix International Raceway.

The penalty was handed to Hamlin, by NASCAR for “actions detrimental to stock car racing” and officials said that NASCAR would not tolerate comments by drivers that “denigrate the racing product.”

“I don’t want to be the pessimist, but it did not race as good as our generation five cars,” said Hamlin after the Subway 500. “This is more like what the generation five was at the beginning. The teams hadn’t figured out how to get the aero balance right. Right now, you just run single-file and you cannot get around the guy in front of you. You would have placed me in 20th-place with 30 to go, I would have stayed there.”

The Joe Gibbs Racing driver was furious over the decision, and received backing from team boss Joe Gibbs, fans and fellow drivers. He vowed to file an appeal, but he has since reversed his stance. However, he still refuses to pay the fine voluntarily.

“After a lot of thought I have decided not to appeal the fine NASCAR has issued,” said Hamlin on Twitter on Thursday. “Dragging myself, my team and NASCAR through the mud for the next 2 weeks would not be good for anyone.”

“I firmly believe I am in the right on this issue and will stand behind my decision not to pay. I understand NASCAR will do what they feel is necessary based on my decision. Thanks to all of my fans and peers who have supported me in this decision. I look forward to putting it to rest.”

NASCAR’s rules state that a driver who refuses to pay a fine could face suspension or have the sum deducted from their race winnings. NASCAR has said that the case is closed with no mention of a suspension, suggesting that Hamlin will be subject to a deduction from his winnings.

By Justin Nguyen
2 Mins read
Spire Motorsports’ #77, piloted by Josh Bilicki, will feature “Slava Ukraini” and adorned in blue and yellow as part of a sponsorship from the Ukranian American Coordinating Council, who is providing armour and aid for the country’s civil defence units.
NASCAR Cup Series

By Justin Nguyen
3 Mins read
This surely won’t be controversial. In response to contact that squeezed him into the wall, Joey Logano bumped William Byron with two laps remaining for the win at Darlington.