Lada Forced Out Of Monza Races After Qualifying Collision 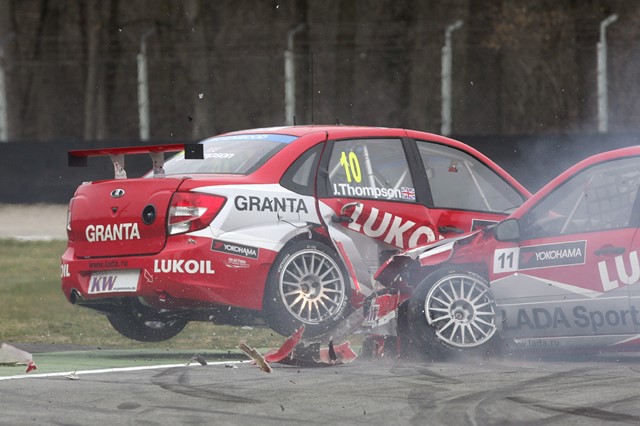 Lada Sport Lukoil have been forced to withdraw both of their Granta cars from their full World Touring Car Championship debuts at Monza as a result of the qualifying collision between drivers James Thompson and Aleksei Dudukalo.

Dudukalo lost control approaching the first chicane during Saturday’s qualifying and crashed heavily into his teammate Thompson, causing significant damage to both cars.

Even though Thompson managed to rejoin the action and set the ninth fastest time in Q2, both cars have been withdrawn from today’s season-opening races at Monza.

The Russian manufacturer is entering the full 2013 season with its Granta model after two toe-in-the-water appearances with Thompson during 2012.

The team informed the stewards that Thompson’s car suffered from severe roll cage damage, while Dudukalo’s front suspension was too badly damaged to repair in time, and the team is unable to confirm the Russian driver’s participation for the next round in Marrakech.