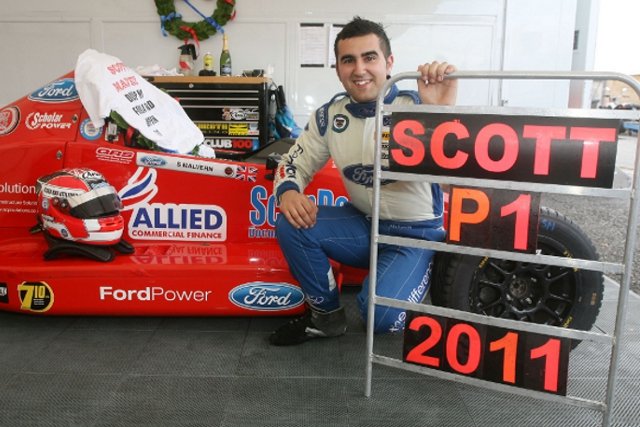 2011 Dunlop MSA Formula Ford Championship of Great Britain champion Scott Malvern is looking to pick up where he left off in the championship and secure race wins on his return during the opening rounds of the 2013 season at Brands Hatch on March 30/31.

With an impressive national racing CV under his belt, Malvern targeted a move into full-time European racing in 2013, but with budget woes stopping that from happening, the BRDC Rising Star has made a return to Formula Ford this season.

“The aim over the winter was to try and move into Europe, looking at Formula Renault or Formula 3, depending on what deals we could find,” Malvern told TheCheckeredFlag.co.uk. “We were offered some exceptional deals over the winter and I would have loved to have taken one, but we couldn’t get the budget which was a little bit frustrating.”

“We were running out of options, so we looked at what would be best for the longevity of my career and looked at the BTCC package, with the live TV and well attended meetings. My sponsors wanted to keep me in single-seaters, so Ford was a no brainer.”

Malvern has put together a deal to race at the opening weekend of the season with Jamun Racing, continuing his long association with the team. Jamun ran Malvern to both his Ford and Renault titles, as well as to success in the 2011 Formula Ford Eurocup and BRSCC Formula Ford Festival, with Malvern working for the team as a mechanic and driver coach.

The 24 year old heads to the opening rounds at Brands Hatch in similar circumstances to the start of the title-winning BARC campaign last season, where he secured a win at the season-opener at Snetterton despite having no prior testing in the car.

“Last season we arrived at the first race having never driven the car, knowing nothing about the current car, with a team that hadn’t run that type of car for ten years,” explains Scott. “So we’re in a slightly stronger position this year in the fact that I might be able to get one day in the car before the weekend and the team have experience with it.”

Despite the fact he’ll be going to Brands on Easter Weekend with a lot less testing mileage in the car than his rivals, Malvern has his focus firmly set on taking race wins on the debut of the new Formula Ford EcoBoost 200, in part to thank backers Contract Lift Solutions and SDS for their support.

“I don’t ever enter a race to finish second and it will be the same at Brands,” he commented. “For me, my whole career at the moment is results dependent and I really need to pull it out the bag at Brands, particularly for my sponsors. I’m looking to get some wins straight away, plus we need some strong points from the off, in case we can turn it into a season campaign.”

Malvern discusses how the deal to return to Ford came about: