The 2013 Protyre Formula Renault Championship kicks off this weekend at Donington Park, with another action-packed season of single-seater racing ahead of us.

The class of 2013 have tough boots to fill following a sensational 2012 season, where grid sizes reached a peak of 32, with a high quality field producing a four different race winners, nine different podium finishers and a sensational two-way championship battle that went down to the final rounds.

This year’s grid has a real international flavour, with the nineteen drivers registered so far including ten different nationalities, with an exciting mix of series returnees and talented newcomers looking to make their mark on the UK’s premier single-seater championship. 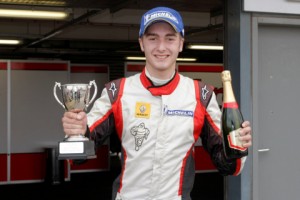 Middlehurst Has Podium Experience In The Series

Heading the entry are MGR Motorsport, who narrowly missed out on the championship last year with Josh Webster. They will be looking to go one better this season, with two potential title contenders in their ranks, Chris Middlehurst and Jorge Cevallos.

Middlehurst took two podium finishes during a late season charge last year and the BRDC Rising Star has his eyes firmly focused on the title this year, while Cevallos was a consistent midfield runner in 2012 and has showed positive pace in testing, topping the recent official test at Silverstone.

Baptista Is One To Watch With Scorpio

2008 and 2009 series champions Scorpio Motorsport have a two car line-up for the new campaign, with Ivan Taranov leading their charge for the championship, the Russian heading into his third year in the series. Taranov will be joined by Henrique Baptista, the Brazilian impressing in pre-season testing ahead of second season.

Front-running outfit Fortec Motorsport continue their long association with the series, heading into 2013 as reigning Winter Series champions. Their four car line-up is headed by second year driver Hongwei Cao, who is aiming to build on a maiden podium in last year’s Winter Series after a mixed debut season in British racing.

Jamun Racing return to the series after masterminding Scott Malvern’s championship win last season under the Cullen Motorsport banner, with Mexican Diego Menchaca leading their assault. The 18 year old, who is part of the prestigious Escuderia Telmex young driver programme, was a regular top twelve finisher last season and has impressed in testing.

Diego will be joined at Jamun by Pietro Fittipaldi, grandson of two-time F1 world champion Emerson. Pietro is making his first steps into single-seaters this season having raced in junior NASCAR formulae in the states recently, making history in 2011 as the first ever Latin American driver to win the Limited Late Model NASCAR title aged just 15.

2010 champions Hillspeed are also entering a two-car team, with Matthew Rao returning for his first full season having made his debut at the end of last year, while joined by talented Formula Ford graduate Jake Cook.

With no real stand-out championship favourite at this stage, the series couldn’t be more wide open as we head into the six-weekend, sixteen-race calendar, which kicks off this weekend with two races at Donington Park.

*The Checkered Flag will be providing in-depth coverage of the Protyre Formula Renault Championship throughout 2013, including race reports from every round, driver interviews, features and more.*