Cammish Makes It Nine From Nine With Thruxton Hat-Trick 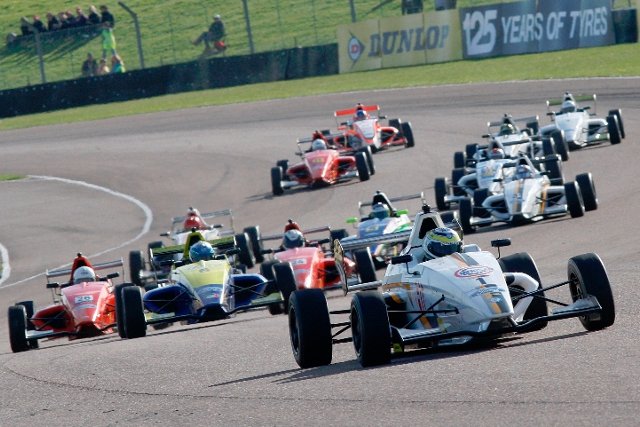 Dan Cammish continued his unbelievable start to the 2013 Dunlop MSA Formula Ford Championship of Great Britain with another hat-trick of victories in the third meeting of the season at Thruxton, making it nine wins in nine races for the JTR star.

With the high-speed nature of the Hampshire circuit seemingly to perfectly suit the Cammish/JTR combination, the 24 year old was once again in a league of his own, taking a clean sweep of pole positions, fastest laps and race wins to extend his lead in the championship standings to 87 points.

Cammish led the opening encounter from lights to flag, but it didn’t come without a scare, a determined Andrew Richardson nearly finding his way past on the opening lap. The former Ginetta racer couldn’t maintain his challenge though, allowing Cammish to storm clear to win by over five seconds.

Richardson dropped to third a few laps later behind Lassi Halminen, but benefitted when the Finn pitted with an alternator problem to re-take the place and secure the first podium finish and first Scholarship Class win of his debut single-seater campaign.

Chasing Richardson to the finish was Harrison Scott, the Falcon Motorsport star completing the podium ahead of Juan Rosso. Fighting back to a superb fifth was Luke Williams, the Jamun Racing star having to recover from the back of the field after contact at the complex on the opening lap, finishing up ahead of Fred Martin-Dye in the SWB Motorsport Sinter.

The second race saw Cammish produce a textbook race win. Breaking away from the pack early on, he was able to storm into a lead of over eight seconds, before backing off to conserve tyres and cruise home for a comfortable five second victory.

A tremendous battle for second place between Williams, Scott, Martin-Dye and Rosso eventually went the way of Rosso, the Argentinian showing great late-race pace to regain the place five laps from the end.

Scott took his second podium of the weekend in third, and with it the Scholarship class win, with Williams and Martin-Dye slipping to seventh and eighth respectively. A great drive from Camren Kaminsky saw the American rise from ninth to finish fourth ahead of Nico Maranzana and George Blundell.

The weekend’s final race produced Cammish’s most commanding win of the weekend, the JTR star dominating from start to finish once again, setting a new circuit lap record en-route to a ten second win.

The battle for the positions behind were fierce throughout again though, with Rosso and Richardson enjoying a race-long feud for second, with Rosso emerging victorious when Richardson suffered a late fuel surge problem, leaving him to settle for a second Scholarship Class win of the weekend in third.

Scott held fourth place for the duration of the race, the valuable points gained moving him into second in the overall championship and into the lead of the Scholarship Cup. Fellow rookie Sam Brabham equalled his best finish in fifth, the 18 year old leading home Martin-Dye, Maranzana and James Abbott.