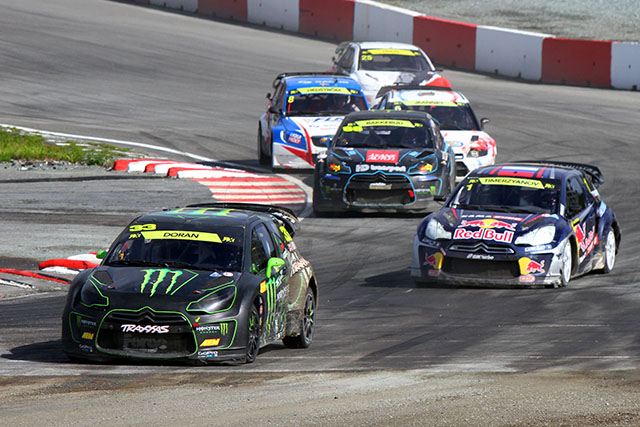 Doran started on the front row having won semi-final two, next to team mate Andreas Bakkerud, who had been victorious in semi-final one. The pair made the best start, Doran just edging ahead and claimed the Monster Energy Supercharge Award for being first to the first corner.

“I really didn’t want to come second today,” said Doran. “We have had very good speed all weekend and it was only my own stupid mistake that put us down the order. I think we have been the fastest car for the last three events now, it’s great to get the win.”

Doran immediately headed for the jokerlap, followed by reigning champion Timur Timerzyanov and Norwegian Alexander Hvaal. Bakkerud led the trio of cars that had stayed on the main circuit at the first corner, only to pick up a puncture at the end of the second tour, allowing Frenchman Davey Jeanney to take the lead.

With Doran behind closing the gap, Bakkerud took his joker on the third lap, returning into fifth. Peter Hedstrom ran second until lap four, when his Skoda Fabia slowed to a stop with engine problems.

Doran ran second with Timerzyanov right behind, the pair passing Jeanney as the Frenchman took his joker on the final lap, the gap close enough for Doran to easily take the lead and win the event and a Rockwell Watch in the process. Timerzyanov finished second, ahead of Jeanney who returned to the circuit in third place following his jokerlap. Hvaal finished fourth with Bakkerud in fifth.

Petter Solberg had topped the table on Saturday evening, but befell suspension problems in heat three before steering problems in heat four, putting the Norwegian star thirteenth overall, just missing out on the semi-finals.

Reinis Nitiss took his third RallycrossRX Super1600 victory in a row, winning his semi-final and the final in commanding fashion. Ildar Rakhmatullin finished second for the second time in a week, while Dane Ulrik Linnemann won his semi-final having taken two fastest times in the heats, but wasn’t able to challenge for victory in the final. Sergej Zagumennov had his best run to date, finishing fourth, less than 0.6 seconds ahead of Eric Faren. Kevin Eriksson was out of the running in the early stages with a puncture.

TouringCar was won by Lars Oivind Enerberg, who easily headed the Intermediate Classification and won both his semi-final and final. Championship contender Derek Tohill finished second, content to not take any risks and finish behind Enerberg, who isn’t a championship regular. Anders Braten rose to the occasion in the finals in front of his home fans, holding off Koen Pauwels for the duration of the race to claim the last podium position.

Victory in the JRX category was taken by William Nilsson, ahead of Kevin Hansen and Magda Andersson.