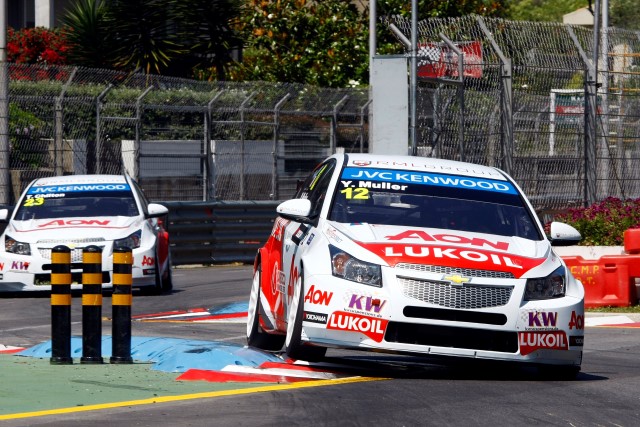 Yvan Muller continues to be the man to beat in the World Touring Car Championship, claiming pole position on the streets of Porto ahead of RML team-mate Tom Chilton.

Muller’s Q2 time was 0.198 seconds faster than Chilton, who returned to the front row for the first time since the Monza season-opener.

Michel Nykjaer made a 1-2-3 for the Chevrolet Cruze, six tenths off the pace in third. Norbert Michelisz was the best of the Hondas in fourth for the Zengo team, one spot ahead of the lead factory driver Gabriele Tarquini.

Pepe Oriola was sixth fastest in his first qualifying session in a Chevrolet, ahead of Lada‘s James Thompson. All-Inkl.com Munnich Motorsport pair Rob Huff and Marc Basseng were eighth and ninth respectively with James Nash completing the top ten and taking pole position for race two.

Tom Coronel was initially awarded that pole before a timing error that saw Tarquini and Oriola given slower lap times was corrected, demoting Coronel from tenth to 11th. Franz Engstler completed the Q2 runners.

Home hero Tiago Monteiro could only manage 17th in Q1 in the second of the Hondas after an earlier turbo change, while Alex MacDowall was 22nd of the 24 runners after contact with the wall.