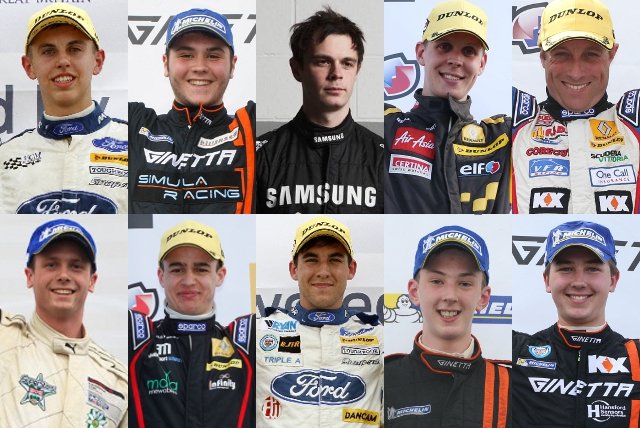 With the 2013 Dunlop MSA British Touring Car Championship and it’s package of support series enjoying their six week summer break, thecheckeredflag.co.uk has decided to pick out the top ten drivers who have impressed us most in the first half of the season from the five support championships:

In a championship so far dominated by Dan Cammish, it’s been hard for anyone else in the series to really grab some of the headlines, but one driver who’s managed it is Harrison Scott.

In his first-season in car racing, the 17 year old has emerged as Cammish’s closest contender in recent meetings, becoming the only other driver than him to have taken a pole position and led a race this season. With seven podiums to his name, the Falcon Motorsport ace has hinted at a bright future in the sport.

It was a big step up for Massot from the Ginetta Juniors to the Supercup this season, particularly in only his second season of car racing. This didn’t phase the Spaniard though and he hit the ground running at the start of the season, taking stunning wins on each of the first two weekends.

The 17 year old is one of only four drivers to have taken wins in the series so far, the others being experienced G55 competitors Tom Ingram, Carl Breeze and Nathan Freke, and he has been hugely impressive so far this season.

After finishing runner-up in 2011 and champion in 2012 with Redline Racing, Meadows has embarked on a new challenge in the Porsche Carrera Cup GB this season, taking to the grid with the new ‘Samsung Smart Motorsport’ outfit.

A run of five wins in six races has shown that the switch has lost Meadows none of his pace and that when he’s on form, the others have a tough task to beat him. Although a frustrating retirement last time out means his championship lead is only at six points, Meadows looks favourite to take the title once again.

In the most competitive, action-packed Clio Cup season in recent memory, Josh Files has emerged on top from a fierce duel with three-times champion Paul Rivett to lead the championship, with a hard-fought maiden win last time out at Croft edging him ahead.

Files has supreme consistency to thank for his advantage, with six podium finishes in the last eight races ensuring he’s at the front, the 22 year old finally putting together the run of results he’s shown the potential for since joining the series.

Championship stalwart Stefan Hodgetts is the Clio Cup’s man in form heading into the summer break, the 31 year old finishing in the top two in each of the last five races, taking a win apiece at Thruxton, Oulton Park and Croft.

While a slow start to the season means the KX Akademy protégé is still 48 points adrift in the championship, the Scuderia Vittoria driver’s inspired run of form has allowed him to catch up the front-runners, and also entertain the crowd with his passionate celebrations.

While Meadows may be topping the Porsche points standings, it’s Stoneman who has arguably been the stand-out driver in the championship so far, the 22 year old making a hugely impressive start to his maiden season in sportscar racing.

Coming back from a life-threatening illness that curtailed his single-seater career, Stoneman stunned his more experienced Porsche rivals with a sensational double win on the opening weekend at Brands Hatch and has been a consistent front-runner since then, with one more win and three other podiums.

Alongside the established names of Files, Hodgetts, Paul Rivett and James Colburn at the top of the championship standings is that of a Clio Cup rookie making waves in the category, Alex Morgan. In his first season in tin-tops after switching from single-seaters, the 26 year old has been a revelation in the competitive Clio field.

Morgan burst onto the scene with a sensational debut victory on the opening weekend at Brands Hatch, and consistent top four finishes and three more podium finishes has put him right in the hunt for the championship.

Cammish has well and truly dominated the new ‘slicks and wings’ era of Formula Ford so far, with the JTR driver taking fifteen wins, fourteen pole positions and eleven fastest laps in the first fifteen races, leading 262 out of the 267 racing laps.

Cammish has been in a league of his own in the championship, drawing on his previous experience in Formula Ford and Formula Renault to stay cool and consistent throughout the season so far, looking rarely under pressure from his rookie rivals as he’s swept to a 150 point championship lead.

Alongside Cammish, Harry Woodhead has provided the BTCC package with its second 100% streak over the first half of the season, with the  15 year old using all his experience from winning the 2012 season-ending Ginetta Winter Series to go on and dominate the first ten races of the Junior season.

Unlike Cammish, Woodhead has been regularly pushed for his wins, with the likes of Ollie Chadwick, Tom Jackson, Will Palmer and Keith Donegan all hot on his heels, but superb pace and racecraft has meant the HHC Motorsport driver has yet to be beaten.

In the most competitive Supercup grid to date, Ingram has been in truly mesmerising form, in particular last time out at Croft where the KX Akademy took a stunning hat-trick of wins, making it five for the season.

While his race-win figure has been matched by reigning champion Carl Breeze, Ingram’s incredible consistency of twelve consecutive podium finishes has put him on top in the points standings by over one hundred points. On his current form, the former Juniors and G50 champion looks set to complete the final part of his unique Ginetta championship trio.

To end, it’s only fair we briefly mention a few of the drivers who narrowly missed out on making the list. Carl Breeze and Paul Rivett for their continued success in the Ginetta GT Supercup and Renault UK Clio Cup respectively, Matt Nicoll-Jones for his superb podium-scoring start in the Supercup, Jonas Gelzinis for his incredibly consistent run to second in the Porsche Carrera Cup GB points and James Kellett for his impressive run as top rookie in the Ginetta Juniors.

Do you agree? Let us know who you think we’ve missed, leave us a comment below or tweet us @thecheckerflag.

By Maurice Henry
5 Mins read
Ginetta Junior scholar Maurice Henry gives a look as to how he has arrived to the 2021 season and how pre-season testing has gone.
Porsche Carrera Cup GBPorsche Mobil 1 Supercup