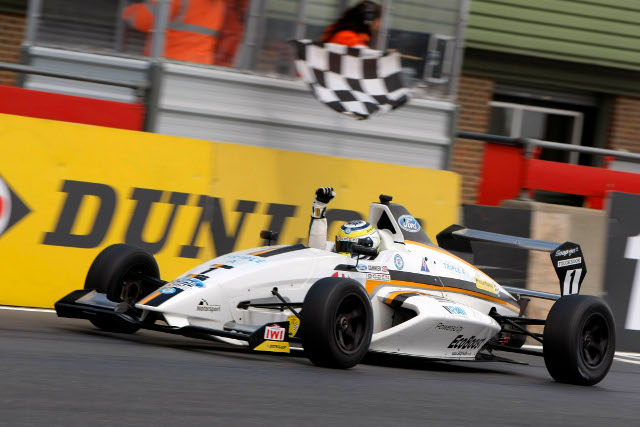 Dan Cammish had to see off a fast starting Harrison Scott to claim victory in the sixteenth race of the Dunlop MSA British Formula Ford Championship – the first of the series’ three races on the Snetterton weekend.

Scott, starting from second alongside Cammish got the better start of the front row men, allowing him to reach Riches side by side with Cammish. However, the pole position had translated into the inside line for the fast right hander, allowing Cammish to take the lead for good before the Montreal hairpin.

Through the remainder of the race Cammish was able to pull away. His five second winning margin was also partly down to Scott’s easing off as he gave up the chase, instead conserving his tyres on his way to fifth second place of the season and seventh Scholarship class victory. He finished just under four seconds ahead of Jayde Kruger, the South African making a second podium visit of the campaign.

He had to break away from his Argentine Jamun Racing teammates Juan Rosso and Pablo Maranzana who fought through the race, Rosso getting the better of the battle on lap six. The same lap brought Sam Brabham’s race to an end.

Like Scott he had been another to make a fast start, heading into Riches third only to come back across the line at the end of the lap pushed down to fifth after struggling with a clutch problem that would force his retirement from the race. Camren Kaminsky, the third man in the JTR team with Cammish and Brabham, would similarly find problems in the race retiring on the opening lap.

There are two further races for the Formula Ford entry tomorrow (August 4); the first at 9:45am with the third and final race at 4:05pm televised live as part of ITV4’s coverage of the British Touring Car Championship.