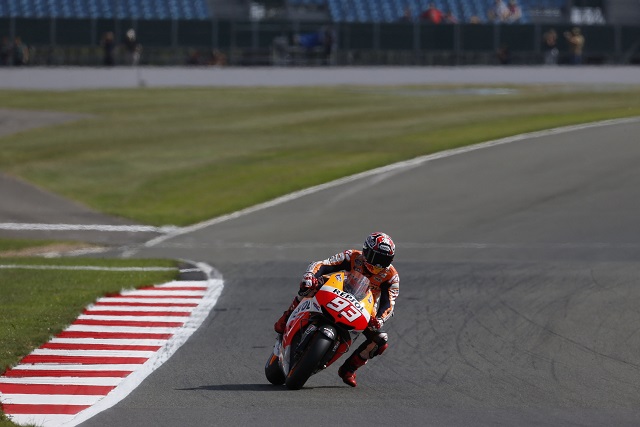 Marc Marquez denied Jorge Lorenzo what would have been a crucial pole position at Silverstone after winning a thrilling battle for supremacy on Saturday afternoon. The two Spaniards left the rest of the field in their wake, shattering the lap record along the way, with Cal Crutchlow the best of the rest in third to the delight of the home crowd.

Crutchlow’s day couldn’t have got off to a worse start with two crashes in the morning practice session. The first at Maggots had British hearts in mouths as he took his time climbing up off the tarmac but his response to a second fall at Vale was more of anger, rather than pain, and he was fit to take his place in Q2. Bradley Smith could do likewise after comfortably navigating his way through the first qualifying session but neither of the Tech 3 Yamahas would have a say in the pole position scrap.

That would be an all-Spanish affair and Lorenzo laid down an early marker with a 2:01.497, immediately inside the previous pole record. Marquez’s response was instant and emphatic with his first lap stopping the clock at 2:01.287 but every punch was being followed by a counter punch as Jorge returned to the top with a 2:01.217. The reigning champion returned to the Yamaha pit with a shake of the head though, suggesting there was plenty still to come.

That would be proved correct a minute from the end as Lorenzo clocked the first ever sub-2:01 lap of Silverstone but in a session that had swung one way and then the other, his time was immediately beaten by his younger compatriot who wrapped up his fifth pole in twelfth attempts by 0.128s.

Crutchlow ensured he will start his home Grand Prix from the front row with a 2:01.425, good enough for third, while a last-gasp improvement from Stefan Bradl lifted him to fourth ahead of an off-colour Dani Pedrosa. Valentino Rossi was another rider to save his best for last, securing sixth on the grid ahead of Andrea Dovizioso while 2012 polesitter Alvaro Bautista will start from the middle of row three, just in front of Nicky Hayden.

After earning a reprieve in Q1, Bradley Smith took advantage to qualify tenth with Colin Edwards excelling to finish eleventh on Forward Racing’s FTR Kawasaki but Aleix Espargaro’s participation tomorrow is in doubt despite qualifying twelfth. The Aspar rider had already booked his spot in Q2 before a crash in FP4 which saw the ART machine hit him after falling at Maggots. Espargaro is being treated for a neck injury and will be assessed ahead of tomorrow’s race.