Osian Pryce secured his first ever victory in the MSA British Rally Championship after coming out on top in a dramatic Todds Leap Rally Northern Ireland.

The 20 year old benefitted from incidents for championship contenders Alistair Fisher and Tom Cave to become the youngest driver to win a BRC event since Jari Matti-Latvala back in 2003.

“They were the hardest stages I have ever done, but it felt like the right time to win a BRC rally,” said Pryce. “I was three times hungrier for it than last year in Yorkshire, when we came so close.” 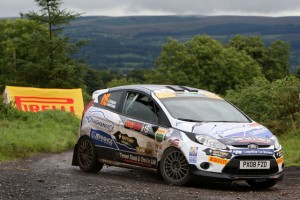 It was Cave who seized the early advantage in the event, making his mark with the fastest time on the opening stage. Behind him though, the surprise package was Jon Armstrong, the 18 year old taking his Ford Fiesta R2 to third on the opening run behind Alistair Fisher, before stunning the R3 runners by going quickest overall on SS2.

This dropped Fisher to third overall, and the Northern Irishman was unable to fight back, exiting the fray on the next stage, the first twist of an event full of drama.

Fisher’s demise had promoted John MacCrone and Jukka Korhonen up to third and fourth respectively behind the impressive Armstrong. They were soon overhauled by the man on the move, Pryce, the Welshman setting the quickest times on SS4 and SS5 to move up to third, before taking second from Armstrong on SS6.

Cave meanwhile had set the fastest times on SS4 and SS6 to build a 39.4 second lead over Pryce. The day’s final stage, would produce the biggest drama so far, as Cave plunged into a ditch exiting a slow left hand bend. Unable to return to the stage, his charge for the win was over, ending his run of podium finishes on every event so far this season.

This promoted Pryce into the rally lead, completing a fantastic recovery from hitting a bank on the opening stages, while similarly rocketing up the leaderboard was Korhonen. The Finn, who was back in eleventh after the opening stage, ended day one second ahead of Armstrong and MacCrone.

It was MacCrone who was the first casualty on day two, a heavy crash hospitalising both the Scotsman and his co-driver Phil Pugh, with both fortunately given the all clear.

One stage later and it was Armstrong’s turn to hit drama, his incredible run coming to an end on the second stage of the day. His day one heroics were more than enough to secure him the Pirelli Star Driver nomination for the event though.

Two stage wins for Pryce meanwhile had extended his lead over Korhonen to over twenty seconds. While neither driver picked up another stage win over the final six stages of the day, Pryce was able to extend his advantage to 50 seconds at the finish as he secured the rally win.

The incidents for Armstrong and MacCrone had promoted Daniel McKenna into third early in the second day, however he was shuffled down to fifth by the faster R3 runners over the course of the day, though the result was still comfortably enough to secure him his third BRC RallyTwo win of the campaign.

Taking the final spot on the podium was Mark Donnelly, the Pirelli Star Driver upholding Northern Irish pride with three stage wins on the second day. Fellow Northern Irishman Jonny Greer went on to take a seasons-best fourth, grabbing the place from McKenna on the final stage, while completing the top six for his personal best finish was Callum Black.

McKenna’s closest R2 challenger was Steve Rokland, the Norwegian challenging Black at points before settling for seventh overall. One place further back was Alex Parpottas, the Fiesta racer completing the RallyTwo podium for his first class rostrum finish of the season.

Cave and Fisher meanwhile returned under Super Rally rules, fighting back to finish tenth and fifteenth respectively, with Cave taking the stage wins on SS10 and SS13, while Fisher took the honours on the final stage of the event, SS15.

Their lowly finishes though means Korhonen’s championship lead has been extended to seventeen points, the Finn now being clear favourite for the title with two events remaining.

By Steven Batey
1 Mins read
Hyundai Motorsport have unveiled its new i20 N Rally2 car that is set to go on sale to customers next year.
British Rally ChampionshipOff Road

By Nigel Chiu
1 Mins read
Motorsport UK has signed an agreement for rallying to continue in Wales until 2023.
British Rally ChampionshipRally

Nicky Grist Stages to Return in 2021