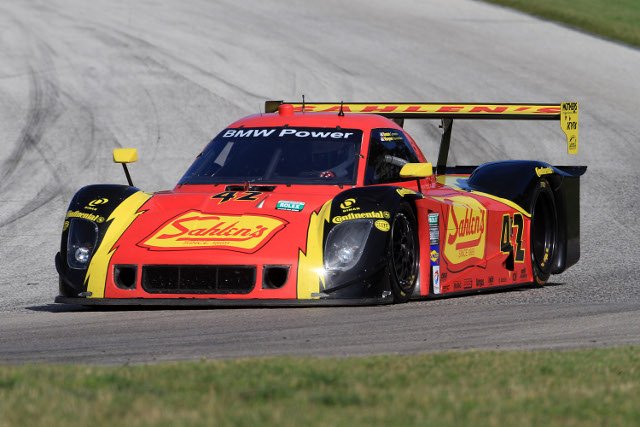 Dane Cameron took his second Rolex Series pole position of the season to put the #42 BMW-Riley of Team Sahlens on the front of the grid for the Championship Weekend at Lime Rock Park.

Around the short 1.53 mile Connecticut track Cameron was able to find four tenths of a second over Christian Fittipaldi, he and Joao Barbosa the best placed of the ten drivers who could take the title away from tomorrow’s two hour, 45 minute race. Jon Fogarty – who lies third in the championship with GAINSCO Racing co-driver Alex Gurney – earned third fastest ahead of the Michael Shank Racing #6 of Justin Wilson and Gustavo Yacaman.

Points leaders Max Angelelli and Jordan Taylor will start from fifth. Just eight points behind their chief title rivals at the Chip Ganassi Racing with Felix Sabates team of Scott Pruett and Memo Rojas. However, their chances of successfully defending the title, were dealt a blow in qualifying. First a Rojas spin brought the session to a stop, the penalty for which dropped the #01 car from second to seventh on the grid. However, following a engine change after the session the team were bumped further back down the order, now set to start 14th and last of the Daytona Prototype class.

Starworks Motorsport’s Alex Popow and Ryan Dalziel – the final pairing in the title fight – will start from seventh, the pairing the immediate beneficiaries of the Ganassi crew’s demotion.

Tom Long will start from the GX Class pole, his best lap in the #70 Speedsource Mazda (56.916) just six-hundredths than the late arriving Lotus Evora.