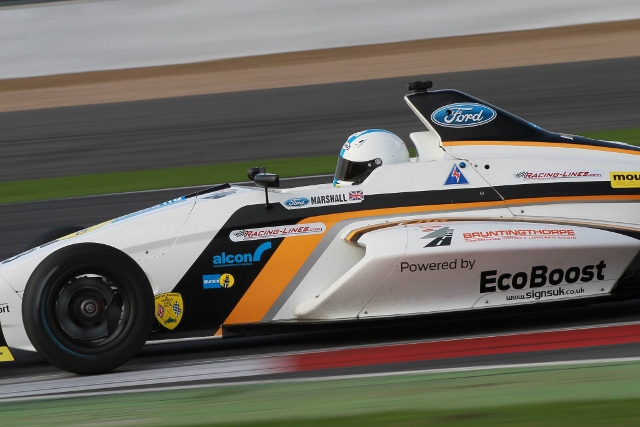 Max Marshall made a dream return to the Dunlop MSA Formula Ford Championship of Great Britain with a pole position hat-trick in qualifying for Rounds 25, 26 and 27 at Silverstone.

Returning to the championship for the first time since a six-race spell in late 2011, Marshall has filled the boots of departed 2013 champion Dan Cammish in perfect style, his best time of 55.128s putting him top of the timesheets.

Despite it being his first competitive outing in the Formula Ford 200 EcoBoost, Marshall was able to follow that time up with the best second and third fastest times to take a clean sweep of the pole positions.

Sam Brabham made it a JTR lock-out of the front row for all three races, the third-generation racer running his team-mate close to end the session just 0.085s adrift.

Jamun Racing duo Juan Rosso and Jayde Kruger will share row two for the opening race, with Kruger grabbing third on the grid for the other two races, Rosso slipping to sixth for both.

Scholarship class leader Harrison Scott was left relatively frustrated with fifth, fourth and fifth place starts, having hoped to battle for the pole position, while Camren Kaminsky will start one place further forward per race, with sixth, fifth and fourth place starts.

Chang Wing Chung and James Abbott will share row four for all three races, with a close session seeing them both within half a second of the pole position time.