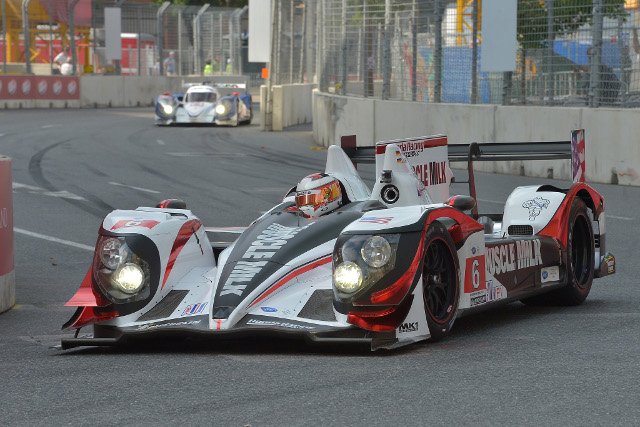 Lucas Luhr has gained another pole position for Muscle Milk Pickett Racing as the German blasted their HPD ARX-03c to overall pole as the American Le Mans Series (ALMS) takes over Austin.

His time of 2:07.851 was more than 2.5 seconds faster than nearest rivals – the Level 5 Motorsports P2 of Marino Franchitti.

Behind Franchitti, and third overall, is the #02 Extreme Speed Motorsports Racing machine of Johannes van Overbeek who clocked a time in the mid 2:11s, marginally faster than the sister #01 of Anthony Lazzaro.

Unfortunately for Level 5 the #551 didn’t get to set a lap as Ryan Briscoe experienced a left rear hub failure as he was leaving pits. As a result the car will start at the back.

Moving into GT and late call up for BMW Team RLL – Joey Hand – battled the wet weather to beat out Antonio Garcia to gain the ALMS GT pole by only 0.265 seconds with a time of 2:17.178.

Hand was not meant to be driving this weekend but has replaced Maxime Martin in the #55 to rejoin long time co driver Bill Auberlen as he tries to repeat his GT win from the Grand-Am Rolex Series race in Austin earlier this season.

In third place – and setting up a potential strong team effort in the race – is Oliver Gavin, the Corvette Racing driver qualified directly ahead of the sister BMW, with the CORE Autosport Porsche rounding out the top five.

It was a case of Irish pride in GTC as Damian Faulkner qualified the TRG Porsche 911 GT3 Cup on ALMS class pole ahead of Sean Edwards in the MOMO car and the #22 Alex Job Racing car.