As we at theCheckeredFlag.co.uk continue to cast our collective minds back over the previous twelve months of racing the time has come to pick our favourite races of the year. The picks span GT racing and single seaters, two and four wheels are spread across races around the world and even includes a change of surface!

Peter Allen – Baku World Challenge, main race
This race was more chaotic than a classic in the traditional sense. Perhaps staging the final race of the FIA GT Series season in the unusual circuit on the streets of the Azerbaijan capital Baku was asking for chaos. That drama began on the opening lap as the leaders attempted to filter their way through the first chicane, with Sergei Afanasiev hitting pole-sitter Niki Mayr-Melnhof after contact from behind. Points leader Stephane Ortelli went off into the lead ahead of Frederic Vervisch and Markus Winkelhock, who both made up a host of places by cutting the chicane, but fell to third shortly before a safety car was called to repair damaged kerbing.

There were bizarre scenes at the restart as Vervisch crawled into the pits with a problem, followed by Ortelli who handed over to co-driver Laurens Vanthoor, amongst confusion over whether the pit window was actually open. Winkelhock and third-placed Alexander Sims were then handed drive-through penalties, while Nick Tandy fell out of second place with damage. That promoted Maximilian Buhk into a considerable lead, but it later suffered a loss of power in the hands of Alon Day. That allowed Vanthoor to recover from his car’s earlier troubles to secure victory as well as the title. Kevin Estre charged to second in the Hexis McLaren, but he and third-placed Day were later penalised for contact they made with the McLaren of Alvaro Parente and Sebastien Loeb, which inherited second.

Read the report on the race – HERE

David Bean – British Grand Prix
This race could have been the turning point of the 2013 Formula 1 season. There were six tyre failures during the race, the most notably for home-favourite Lewis Hamilton while he was leading the grand prix. This not only provided a lot of unpredictability and a sense of jeopardy while the race was playing out, but also had consequences for the rest of the year as Pirelli was forced to go back to the 2012 tyre construction on safety grounds. Adrian Newey admits that this helped Red Bull, and could explain some of Sebastian Vettel’s dominance in the second half of the season.

Also, Vettel retired from the race in Silverstone with a gearbox problem, fooling us into thinking that he and his car were fallible.

Because the British GP wasn’t all about these things (Credit: Octane Photographic Ltd)

James Broomhead – Macau GT Cup
I’ll admit I would have been struggling to pick a race that was head-and-shoulders above all others if it wasn’t for the GT cars around the Guia Circuit. The track is one of the best in the world, though introducing the likes of the Mercedes SLS is like – to steal a phrase – dropping a supertanker into the canals of Venice.

A typical street circuit first lap crash thinned the field of potential race winners, as well as limiting the number of racing laps in the event. Maro Engel had a comfortable lead in one of the Erebus Motorsport SLS before a flat tyre took what looked like a easy win away from him, It was, however, the for the race to really kick off. Edoardo Mortara – a man known as Mr. Macua – pulled off an audacious move to take second, but he needed help from one of the slower drivers in the race to take the lead. The top four were bottled up through the super-tight hairpin and as they raced towards the start of the final lap they fought two and three abreast though the fast corners that are – by the number of accidents in them – tricky enough to complete alone. Somehow there was only minor contact, a space opening just wide enough for Mortara to take the lead for his sixth career Macau win. 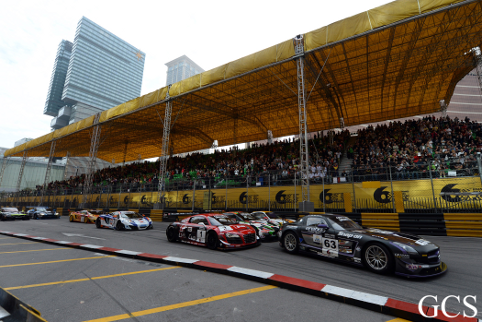 Mortara, in the centre here, would fight back in tremendous final few laps (Credit: GCS)

James Charman – Camping World Trucks at Eldora
43 years in the making, a NASCAR national touring series returned to the dirt for the inaugural Mudsummer Classic at Eldora Speedway. Not only was this race memorable for the fact it was the first NASCAR dirt race since 1970, it featured some of the most exciting racing all season in any of the three top NASCAR divisions. The nature of the circuit allowed for multiple lines to be used, with some drivers opting to take the high line, while others hugging the inside wall. The half-mile length of the circuit also meant that the leaders soon caught up to the tail of the field, resulting in traffic being an issue for the majority of the 150 lap race. A late race duel with Kyle Larson and Austin Dillon provided action until the final lap, with a green-white-checker just adding to the drama in the dying moments.

The trucks went back to NASCAR’s roots, racing on dirt (Credit: Chris Graythen/NASCAR via Getty Images)

Alex Goldschmidt – DTM, Norisring
The race that stands out for me for two reasons was at the Norisring earlier this season, where we saw just how quick Mattias Ekstrom can be when it all comes together, because after all it’s a case of “Go Hard or Go Home,” as the two-time DTM champion says, when he secured his first victory of the 2013 season on his 35th birthday. It was all going rather well for the Audi Sport veteran with an action-packed 83-lap affair, until just one blemish that was through an accident involving some water and his racesuit caused the second race in nearly thirty years of the DTM’s varied history to be declared without a winner. But family won’t know about certain things like parc ferme regulations, right?

Read the race report on the Nuremberg street race – HERE 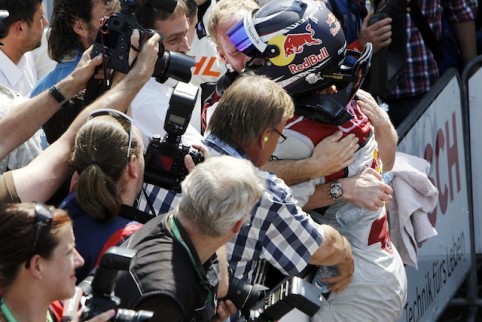 Joe Hudson – ALMS at COTA
If only for the absolutely stunning British and Irish fight for the lead of GTC between Damian Faulkner and Sean Edwards which lasted probably a dozen laps and saw them covered by probably less than a second for most of it. It was very poignant in the fact that it was one of the last races for Sean before his untimely passing and it showed how much he loved racing and how hard he would go for the victory at all costs. The door banging added a bit of extra spice until Edward’s #30 suffered a puncture and was effectively out of the fight.

Dan Mason – MotoGP, Valencia Grand Prix
The enthralling MotoGP finale at Valencia will be my race of the year, purely because of the sheer drama and nail-damaging tension it created thanks title contender Jorge Lorenzo’s tactical approach.

Knowing he needed main rival Marc Marquez to finish fifth to be in with a chance to steal the title, Lorenzo cannily slowed the pace and formed a train of hounding motorcycles to try and back Marquez into trouble. Lorenzo was in the feistiest mood of anybody all season that day at his home race, fighting back at Honda’s Dani Pedrosa several times in a superb battle that even the motorcycle racing cynics locked their eyes into.

Lorenzo tried, but it was not enough despite the Yamaha rider eventually romping to victory, while fellow Spaniard Marquez claimed a historic maiden title in his first year of top class grand prix racing at the tender of just 20. A sensational talent, now fully recognised to those unfortunate not to have noticed over the previous three years.

The best race I watched this year came courtesy of IndyCar from the streets of Sao Paulo. With only a few laps to go, Josef Newgarden was all over the back of Takuma Sato and looking for a way past. Sato had won his first IndyCar race at Long Beach and was high on confidence – but then James Hinchcliffe caught them both. He quickly dispatched Newgarden, before claiming his second of three victories this year with a textbook switchback move on Sato at the last corner of the final lap. Superb. The epic Marquez/Lorenzo battle at Silverstone for the British round of the MotoGP championship also deserves a mention.

Louis Suddaby – Moto3 Valencia Grand Prix
I agonised between two for this one. The second part of BSB’s Brands Hatch triple header where Josh Brookes came from 20 seconds behind to deny Lee Costello a maiden victory was a strong contender but the Moto3 championship decider just edges it for me. Final race showdowns are often surrounded by hype before ending in anti-climax but this race didn’t just live up to the hype, it far surpassed it as the title hung in the balance until the very last corner.

The astonishing events of Motegi meant we had three contenders for the title at Valencia with Luis Salom, Maverick Vinales and Alex Rins all knowing that a victory would crown them world champion and each would start on the front row. Nothing matched this race for sheer tension as the trio ran nose-to-tail and Salom was the first to crack, sliding out with eleven laps to go. With that, it was left to Rins and Vinales to fight it out and with one lap of the season remaining, they were still inseparable. Maverick muscled past at turn two but Alex threw everything at him, including a banzai move at the last corner, but Vinales held his nerve to take the race and the title.

The Moto3 came down to the wire at Valencia (Credit: MotoGP)