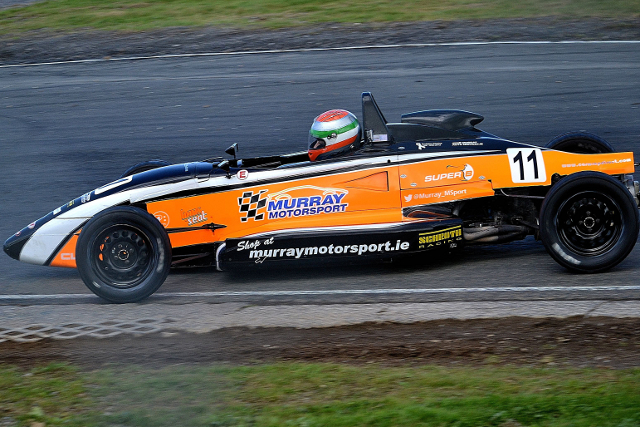 Niall Murray ended his impressive maiden season in the 2013 Irish Formula Ford Championship with a pair of podium finishes in the final rounds at Mondello Park.

Following on from his first single-seater victory last time out at Kirkistown, the former Ginetta Junior Championship front-runner headed to Mondello aiming to rubber stamp a top three championship finish.

Starting fourth for the opening race, the teenager started well to gain a place on the opening lap. After hassling the lead pairing early on, the Dubliner eventually had to settle for third as his tyres lost their edge.

A strong performance in wet qualifying for race two saw the 2010 Ginetta Junior Ireland champion put himself third on the grid. Once again he found himself sat in third for the majority of the race and despite setting the fastest lap of the encounter, Murray was unable to gain a place, taking third at the flag once again.

Murray’s brace of podium finishes ensures he finishes third overall in both the 2013 Irish and Northern Irish Formula Ford Championships, ending up a mere fourteen points behind champion Ivor McCullough in the Irish series.

The Murray Motorsport-backed racer is finishing off his maiden single-seater campaign with the Formula Ford Festival at Brands Hatch and the Walter Hayes Trophy at Silverstone in the coming weeks.

“I’m very happy with the results we have achieved as a team this season, especially as it was our first ever season running a single seater,” Murray reflected. “Massive thanks to everyone who gave us a hand over the season, getting us out of a hole on more than one occasion! In particular a big thanks to Paul, Eoin and especially my dad Joe at Murray Motorsport for all the hard work over the season spending hours on the car trying to get it perfect for me.

“Hopefully next year we can have some further strong results from the first round onwards and fight for the top honours.”